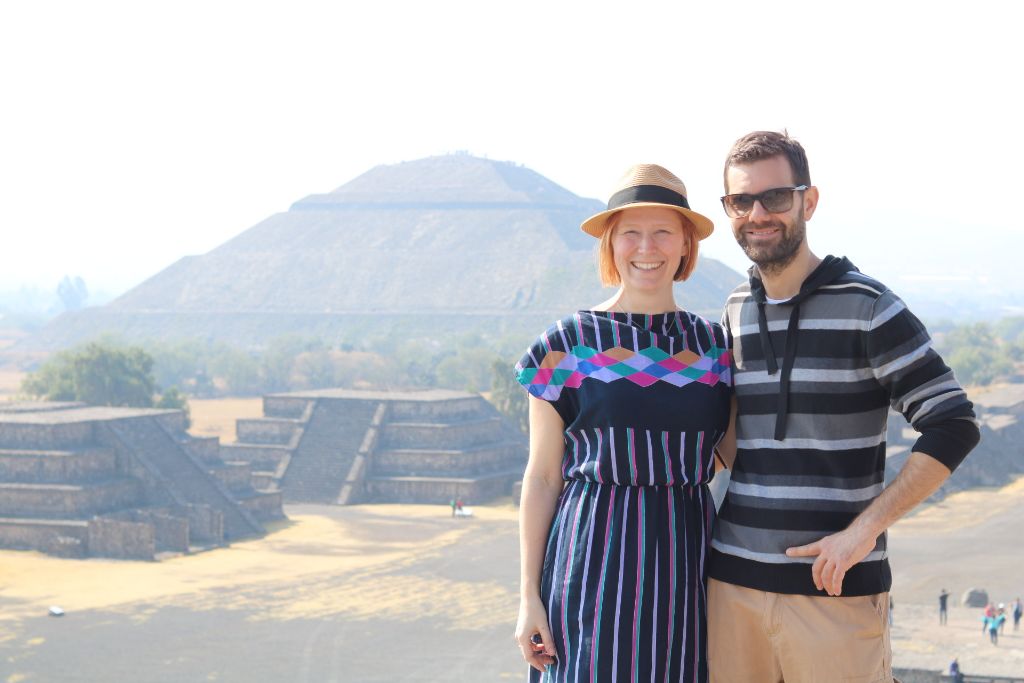 For my 40th birthday I wanted to celebrate by traveling to somewhere I had never been before. I had been itching to check out Mexico City, and even though friends told me three days was not enough time to explore the bustling city, we decided to go for it.

Yes, the travel there was a bit long for a three day weekend, (1 hour 20 minute flight from Edmonton to Vancouver then a 5.5 hour flight direct to Mexico City), but when presented with the option of 72 hours in Mexico City, or no hours, I would do the same again.

We had exactly three full days in Mexico City and I think we made the most of them. It was a fabulous way to mark my 40th birthday, so if three days is all you have to explore, I say go for it.

How we got around:

Public transit from the airport is an option; however, our plane landed after midnight and we were back on our way to the airport at 4 a.m. to catch our return flight, and the metro is not operational at those hours. Uber is very cheap and convenient (and there is free wifi around the city), but the only time we took Uber was to and from the airport.

* We met someone who took Uber to see Teotihuacán and they had to pay an additional 200 pesos in road tolls they were not expecting to pay – be aware there may be extra costs if you choose this option.

TOUR OF THE HISTORICAL CENTRE

We kicked things off by joining Strawberry Tours for a walking tour of the historical centre. Our 2.5 hour tour included a quick history from the Aztec Empire, through the Spanish conquest, and onto independence of the nation. We navigated our way through the Zocalo, admiring highlights like the Palacio de Bellas Artes (Palace of Fine Arts), the Casa de los Azulejos (house of tiles), Church of San Francisco (where I bought a delightful flan in a cup from a nun for 15 pesos), and finishing up at Temple Mayor.

Several people recommended dining at Azul Historico, which is set in the courtyard of a colonial-era palace.  This is a higher-end restaurant where you can watch women prepare handmade tortillas. Our cochinita pibil, pit-roasted pig that’s made in the traditional style of the Yucatán Peninsula, tacos and the enchiladas made with sautéed hibiscus flowers were the most beautifully presented food we had during our trip.

As we approached one of the largest retail markets in Mexico, it became obvious that a late afternoon visit was not on the itinerary of many (or any) other tourists. The market was quiet with vendors tending to their produce, but not many people buying, and I was the only gringo in sight. The market is massive – you could easily get lost for hours. We bought some Chicharrón from a vendor who also let me have a go at chopping the giant discs of shredded pork, as well as some nuts and dried fruit for our next day’s journey.

After the Mercado, we jumped on the metro and headed to Roma Norte so I could partake in one of my favourite things to do when I am traveling – visit thrift and vintage stores. The Spanadian let me check out Vintrend and Goodbye Folk in exchange for some time to him enjoy some gluten from a bakery and an afternoon latte at a pop up corner cafe.

Thanks to my friend Matt’s recommendation, we dined at Taqueria Orinoco in Roma Norte. The Spanadian found someone who could confirm that the northern-style tacos (al pastor, bistec, or chicharron) and accompanying potatoes were gluten free. The line was short and once we ordered we opted to sit at the bar seats with a view of the grill and all the taco-making action.

A dose of gluten for the Spanadian picked up at a no-name bakery.

The vintage clothing vibe at Vintrend.

Hands down – the highlight of our first day in Mexico for me was our Lucha Libre Mexican Wrestling Tour (400 pesos). After getting warmed up with some mezcal and outfitted with our own Mexican wrestling mask, we arrived at the arena for the fighting to begin at 8:30 p.m. on a Friday night. The theatrics brought me back to my childhood,  watching Hulk Holgan and Macho Man Randy Savage in the late 80’s. The passion of the crowd, costumes and athleticism/choreography was far more entertaining than I could have imagined. The booing was intense; I wish that we had closer seats for a ringside view of all the drama.

We set our alarm for seven a.m. so we could get an early start at heading to Teotihuacán. Rather than a tour, we took  the metro to the Terminal del Norte station, walked across to the bus station and easily found gate 8 where we bought return tickets (102 pesos) and were on a bus leaving five minutes later. The ride is said to be around an hour (our drivers did it in less both ways), and we arrived at the gate by 8:45 a.m. to the sight of hot air balloons across the horizon.

Almost everything I read said the doors open at 9 a.m., but we learned that they open at 8 a.m. – which allows early morning visitors to enjoy the historical site before the tour buses start arriving around 10 a.m.

With few people at the site, we climbed  the Pyramid of the Sun first, followed by the Pyramid of the Moon. We casually walked along the avenue of the dead, taking in additional sites and the museum, before walking out the south gate at 12:15 p.m. By the time we left the site was busy, noisy, and hot. Getting up early to get to the site before the crowds, and not having to wait in line to climb the major temples, was the best decision we made all weekend.

Open only Friday – Sunday, this Roma Sur restaurant will be a favourite for anyone who loves lamb as much as The Spanadian does. We enjoyed our barbacoa (slow cooked lamb tacos) in the late afternoon along side local families eating family-style at brightly decorated tables.

After an early morning temple trip and a large lamb lunch, we were in need of a siesta. On our way back to our place at Suites DF, we walked through the Monument to the Revolution, which turned out to be  a happening place on a Saturday evening. There were so many girls that looked like they were going to prom alongside girlfriends in matching dresses, guys in suites, and too many hummer limousines to count. We learned that the girls were actually dressed up and celebrating their 15th birthday.

Street food options are abundant in Mexico City, so we hit up some street taco stalls in Roma Norte for a late dinner on the way to the club. We had an assortment of carnitas, chorizo, and chicharron tacos (5 minis for 25 pesos – we had two plates), followed by larger rotisserie chicken tacos (17 pesos each). So essentially we were stuffed on less than $7 Canadian.

We arrived at Mama Rumba around 10 p.m. where a Cuban band was taking the stage. Although the place was packed we managed to find some room on both floors to get some dancing in, as well as some excellent people watching. We left shortly before 1 a.m. and still managed to catch a bus back to where we were staying near the Monument a la Revolution.

We woke early, not by choice, to loud music and someone speaking on a microphone. We later learned that it wasn’t a protest, but instead it was the Mexico City marathon.

With Paseo de la Reforma avenue closed to traffic on Sundays, we walked the avenue alongside runners, cyclists, and dog walkers until arriving at Bosque de Chapultepec. Mexican families flock to the park on Sundays where vendors were hawking all sorts of goods, trinkets and treats. The scene was a bit busy for us, so we opted to grab a gordita from  street seller and jump on the metro towards Coyoacan.

Line up at the Frida museum

I had read that it best to buy tickets to Frida Kahlo museum in advance, advice we ignored, and when we arrived the line up was down and around the block. With so few hours left in Mexico City, we opted to forgo the museum and had ceviche for lunch at the Mercado Coyoacan instead. We walked the neighbourhood, indulging in an organic espresso at Cafe Avellaneda and some gluten-free pastries at Las Mamazotas Kitchen.

We took the metro back north so we could walk through the Condesa neighbourhood, including the Parque Mexico and back to our Alameda Central neighbourhood. We may not have taken part in the Mexico City marathon, but it felt like we walked the equivalent of a marathon that day.

Our final meal was at the taco stands near the Monument to the Revolution, where the whole hog tacos were our favourite of the trip. Perhaps it was because we were so hungry, or because of how satisfied with our trip to Mexico City, but they were the juiciest and most flavourful meat tacos of the weekend.

A special thanks must be given to my official translator, The Spanadian. I’ve been saying since we met that I find it hard to understand when he speaks his speedy Spanish, so it brought me great joy to see the locals confused by his strong Spain (th, th, th) accent.  Thank you for helping us navigate the city and ensure I was eating gluten free. Un beso.