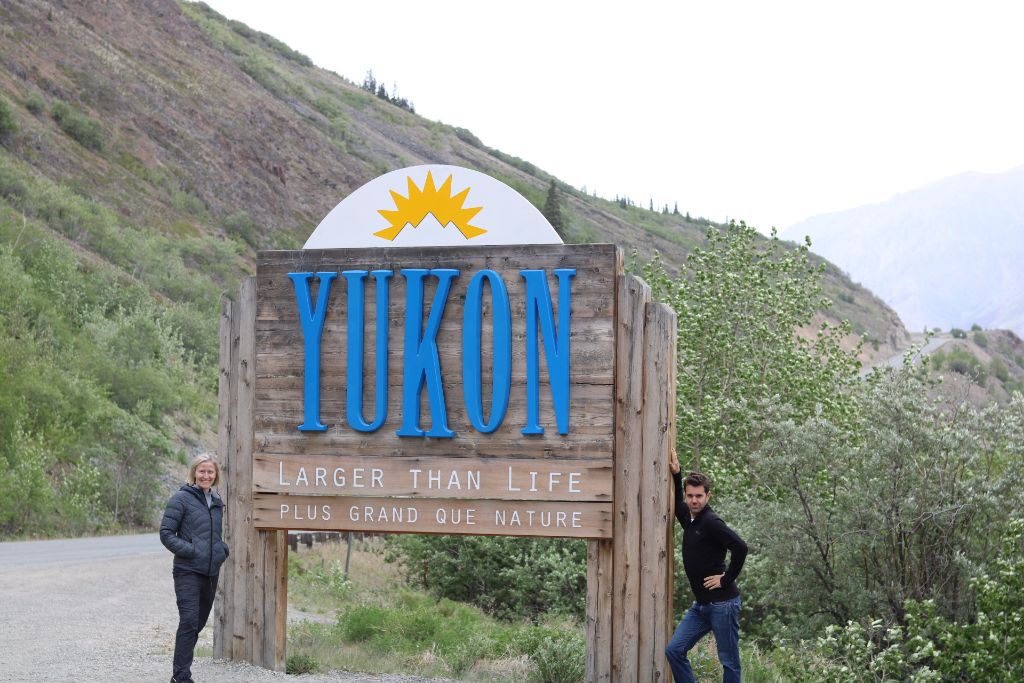 We recently celebrated our fifth anniversary with an extended weekend in Whitehorse, Yukon Territory. For $300 return from Edmonton each we booked round trip flights with Air North, Yukon’s Airline, which allows guests to take two suitcases and still gives out snacks, mini-meals, and drinks for free – it could be one of the best travel deals we score all year.

We arrived late on a Thursday night, which gave us three full days to explore before catching a 6 a.m. direct flight back to Edmonton on the following Monday morning. While we easily could have spent more time in the Yukon (allowing us to walk in the footsteps of gold rush hopefuls along the Chillkoot Trail, canoeing up the Yukon River, or living up the Klondike experience in Dawson City), three days in the land of the midnight sun was enough for a taste of the Yukon. Here are some of the activities that kept us busy on our trip:

IN AND AROUND WHITEHORSE

We fueled up for a full day of Whitehorse sightseeing with a stop at the interestingly named Burnt Toast Cafe. This was my introduction to gluten-free in the Yukon, and the Croque Madame was so good I came back two days later just to order the same dish.

Zoe, who I enjoyed a meal with in France six year prior and stayed in touch with courtesy of Facebook, joined us for dinner at the Woodcutter’s Blanket. The small log cabin is home to a hip restaurant and bar that served up fresh local brew and innovative bites. After dinner we walked along the waterfront while she pointed out local artwork including a monument which honours former students of a Yukon residential school.

We had several recommendations to visit Klondike Rib & Salmon, which came along with the disclaimer that it was touristy, but really good. Surprisingly, the space is not winterized and restaurant closes up at the end of the peak travel season. The Spanadian spotted the dessert counter the second we walked in, and it may be the first time I’ve ever seen him not finish the dessert – the sourdough bread pudding with Yukon Jack caramel sauce could feed a family.

The MacBride Museum was a great place to get immersed in the history, geography and culture of the Yukon. We spent hours exploring the exhibits that include history and beautiful artifacts from the Yukon First Nations, artwork (including a Ted Harrison collection), a taxidermy room filled with local mammals (including an albino moose), an extensive look at the challenges and speed of World War II built the Alaska-Canada (ALCAN) Highway, and a gallery filled with fabulous fashion and antiques from the gold rush.

My childhood memories of the Robert Service poem ‘Sam McGee’ and the Harrison’s colourful paintings came flooding back as guests can visit Sam McGee’s real cabin.

We stepped aboard the S.S. Klondike, dry-docked along the Yukon river, for a taste of what a journey aboard a riverboat would have felt like. A free video near the information centre shows how sternwheelers of the British Yukon Navigation Company Yukon River steamed their way between Whitehorse and Dawson City. The S.S. Klondike, which was the largest in the fleet, has been restored, refurbished, and is stocked with accessories and historical props to represent the glory days of the first half of the 20th century.

SHOPPING (OR AT LEAST SOME GOOD BROWSING)

I’m normally not one for gift shops, but both The Spanadian and I were really impressed by the quality and quantity of goods in the local gift shops and stores. Visitors can choose from beautifully hand-crafted First Nations slippers or moose tufting art, quirky local slogan t-shirts and posters, and a wide assortment of locally crafted jewelry. We also popped into a couple pawn shops which also had a wide assortment of local crafts for sale at reduced prices.

Travelling with a civil engineer means I am always on the lookout for bridges to entertain him with so the pedestrian suspension bridge at Miles Canyon was a must. The hydroelectric dam has tamed the basalt cliff-lined canyon, but narrow path likely created havoc for many boats heading towards the gold rush.

We soothed our muscles with a soak at the Takhini Hot Pools, which were a 30 minute drive from Whitehorse. The sun was still high in the sky when one of the staff came into the pool with a large stick to pull out the plug to begin draining the pool (which was very entertaining). Traveling in the winter? Check out their movie nights and frozen hair competition.

In Whitehorse, I reconnected with a friend from my days at the University of Victoria I hadn’t seen in 16 years. Amy took us on a hike to Fish Lake where she told us all how much she has loved living in Whitehorse for the previous two years; so glad we got to spend a few hours hiking together in her beautiful new home.

The Spanadian was hoping to see some Caribou when he learned that Carcross is short for Cariboo Crossing. Sadly, by early June, the herd had likely moved north. Instead we spent a few hours exploring an area that is home to the Carcross/Tagish First Nation.

After powering up with more gluten-free treats at Caribou Crossing Coffee, we found lots of photo ops among the all the railway sights, as Carcross is home to the White Pass & Yukon Route. While we opted to drive, we heard the train route is stunning and a great day activity.

Carcross Commons is home to Skookum Jim’s home, which is a MacBride museum exhibition about the gold rush. After learning how the Skookum Jim found the gold discovery which led to the Klondike gold rush, I enjoyed perusing the boutiques and even picked up a Shelley MacDonald hand-crafted ring to remember the trip.

While we didn’t have the time to explore on this trip, Carcross is a great place to hike and bike on Montana Mountain for those wanting to work or stretch their legs.

We also stopped in to see the smallest dessert in the world before taking the advice of the lovely ladies in the tourist information office and making a side trip to for dinner, rather than driving straight back to Whitehorse.

The Spanadian enjoyed a hearty batch of halibut fish & chips at the Six Mile Resort. This was the only place during my trip where I struck out on gluten free. Even though I couldn’t eat here, I found loads of amusement from admiring all the antiques, license plates, and antlers throughout the property.

Neither The Spanadian nor I had been to Alaska, so we were eager to cross over for an afternoon in Skagway, which is known as the gateway to the Klondike. After being welcomed by a small black on the highway, we arrived to find two cruise ships in port, which we later learned meant it was a quiet day. We arrived at the visitor centre in time to watch the free hourly showing of the 30 minute film Gold Fever: Race to the Klondike (which I highly recommend). We also picked up free tickets to a Ranger led tour of Jeff Smith’s Parlour.

We learned that many of the stores are owned by the cruise ships and can be tourists traps, but we enjoyed walking the side streets where we found vintage cars, antique shops, and gold nuggets for sale. I was eager for some seafood but we were told that when people from Whitehorse get a craving for Thai food, they apparently make the drive to Skagway for a bite at Starfire. We took the recommendation we had received by several in Whitehorse, and the the spicy bowl of soup and curry at Starfire did not disappoint.

On our way out of Skagway we took the turnoff to Dyea, which shows no resemblance to the boom town jumping off point for the ChillKoot Trail it was over 100 years prior. The slight side trip provided stunning views, and a welcome relief from the cartoon like feel of Skagway, and we even spotted a bald eagle.

A weekend in Whitehorse was a great way to celebrate our anniversary. We met so many friendly and kind people who were excited to learn we had traveled from Edmonton for just a mini break. From hiking, biking, canoeing in the summer, to all the winter activities in between, there are so many reasons to come back to the land of the midnight sun. Yukon Territory – I can’t wait to come back.