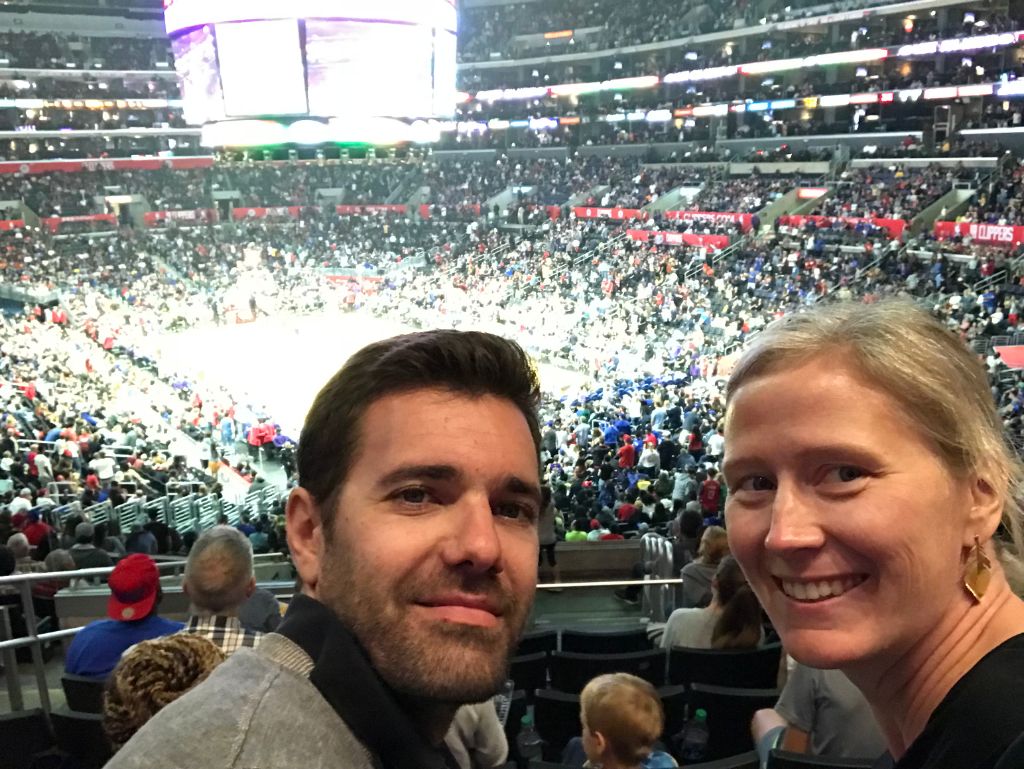 When Westjet posted a seat sale a few weeks before The Spaniard’s birthday, I took advantage of a deal I saw on the direct flight from Edmonton and booked us a three-night trip to the city of angels.

I knew I wanted to take him to an NBA game, but after that I wasn’t sure what we would get up to. Everyone I spoke with said we would have to rent a car, but we weren’t excited by the prospect of sitting in traffic, trying to find parking, or paying for parking (especially with the Canadian $ making our American trips more expensive).

So – I took a look at where the LA metro and bus system could take us, and we decided to plan our trip around that. From the airport we took the free shuttle to the LAX metro stop  where we were able to take the metro conveniently for around the same time it would have been for an uber or the FlyBus in high traffic times. Google didn’t give us the option of taking the metro the whole way – but we did it – even beating the times Google gave us for bus options.

Here are 10 things to keep you busy during a weekend in LA – and all without the stress of driving/parking a car:

1. Watch the LA Philharmonic at the Walt Disney Concert Hall

Even if you can’t watch a show at the Walt Disney Concert Hall, you can take free self-guided tours of this magnificent building designed by architect Frank Gehry and recognized as one of the most acoustically sophisticated concert halls in the world. We walked up before the evening performance and scored last minute tickets to watch choreographer and L.A. Dance Project Artistic Director Benjamin Millepied join conductor Gustavo Dudamel and the LA Phil  bring Prokofiev’s Romeo and Juliet to life. The performance was incredible and ended up being one of the best experiences we had all weekend.

2. A historical walking tour with the LA Conservancy

A highlight of the trip was a historic walking tour of downtown Los Angeles with the L.A. Conservancy, which was formed in 1978 as part of the effort to prevent demolition of the stunning Los Angeles Central Library. Our 2.5 hour tour included loads of historical information, lobby visits to incredibly preserved buildings (including the Bradbury Building which was a filming location for Blade Runner), and a ride on Angels Flight. Whenever I make it back to LA, I will certainly do one of their other tours.

3. A show at The Comedy Store

Have to thank my friend Marc for the recommendation to catch a show at The Comedy Store (and buying early as shows will sell out). We got tickets to the early show in The Main Room which cost us $20, plus a two-drink minimum. Our show include six comics which included Orny Adams, Kate Quigley, and Bobby Lee – all three had me busting a gut laughing.

4. Watch an NBA game at the Staples Centre

Both the LA Clippers and the LA Lakers were in town for the weekend, so we had our choice of games; however, since it was the Lakers home opener and Lebron’s first regular season game as a Laker, the price for those tickets were crazy. So instead, we watched the Clippers beat the Houston Rockets for a fraction of the price. The Staples Center is an incredible venue – definitely worth checking out a game. (The Staples Center is also home to the LA Kings – who happened to be in town the same weekend as us – but The Spaniard declined my suggestion of a hockey game, and said one event at the Staples Center was enough for one weekend).

5. Walk, ride, and people watch your way from Santa Monica to Venice Beach

The boardwalk from Santa Monica to Venice beach provided hours of entertainment and some serious fun in the sun. We took the metro to Santa Monica, enjoyed brunch, and then wandered the pier, strode past muscle beach, and even jumped in the ocean as we walked past buskers, street performers, roller bladers jamming out to funky tunes at Venice Beach, and kids ripping it up in the skate park. After walking along the Venice Beach canals we grabbed some ice cream and donuts on Abbot Kinney BLVD before heading back to LA.

6. Get cultured at The Broad

After our Saturday walking tour with the LA Conservancy we headed over to The Broad, a contemporary art museum with free admission, where we only had to wait half an hour for admittance. A select number of free tickets can be booked online in advance, but we weren’t that organized, besides,  our short stay in line gave The Spaniard time admiring the $140 million  ‘veil and the vault’ architectural design of the building. The space is stunning and the contents are creative, imaginative and fun.

7. Dine at the Grand Central Market

A downtown landmark since 1917, the Grand Central Market was the perfect place for us to grab a bite of breakfast before our LA Conservancy tour. I opted for gluten-free pupusas and tamales from Sarita’s Pupuseria while The Spaniard declined waiting in line at the uber popular Eggslut, and got french toast and a latte from Valerie Confections Bakery & Cafe. By the time we walked back through the Grand Central Market as part of our LA Conservancy tour the place was packed with people eating, drinking, and living the laid-back LA lifestyle.

8. Get your geek on at the Griffith Observatory

Not only can you get views of LA and the Hollywood sign, visitors of the Griffith Observatory can look through telescopes and learn about our solar system for free! During our visit we took in two staff explanations – one of the Tesla coil, and the other on Foucault’s Pendulum. Their website recommended taking public transit (there was a DASH bus stop conveniently located outside the closest metro stop), which made arriving easy, and we walked down through Griffith Park when we were done.

9. Walk the Hollywood Walk of Fame

Once we were done at the Griffith Observatory we walked to the closest metro and jumped on for a few stops, which took us to Hollywood. We checked out the hand prints and autographs located outside the TCL Chinese Theatre, walked the steps of the Kodak Theatre – checking out the Academy Award best movie of the year winners, and weaved through buskers and hawkers on the Hollywood Walk of Fame. It was probably our least exciting activity of the weekend (too touristy), but we felt we had to check it out – and the people watching was worth the visit.

We had decided on an AirBNB in Koreatown because of the proximity to the metro line, and learned after we booked that we were in a culinary hotbed of LA. Prior to our trip we watched Anthony Bourdain’s Parts Unknown episode on Koreatown; while we didn’t manage to make it to the spots he highlighted (mainly because having Celiac disease limited my options), we did enjoy some tasty bites, including Escala – which serves up Colombian Korean Flavors In The Heart Of LA’s Koreatown. While there Korean options appeared abundant, we also saw Thai, Vietnamese, Japanese, Indian, and even dumpling options throughout Koreatown.

Lunch at Escala in Koreatown

So, all of these things we did during our three-day weekend in LA were accessible by public transit. We decided to stay in the city, but if we had wanted to get to Disneyland – we would have opted for a shuttle rather than renting a car.

The one exception we had to taking public transit was when my friend Orly, and her husband Jeff, drove us to dinner and then home after checking out a show at the Comedy Store. We had planned on taking an uber that night – but they graciously drove us back to Koreatown. I came to visit Orly 20 years before, spending a week with her in LA after meeting her on a Mexican cruise with our families. After the comedy show, Orly and Jeff introduced us to a tasty sushi restaurant in West Hollywood; I hope that they pack up the kids and come visit us in Edmonton, so I don’t have to wait another 20 years for our next meeting to return the favour for their lovely hospitality.