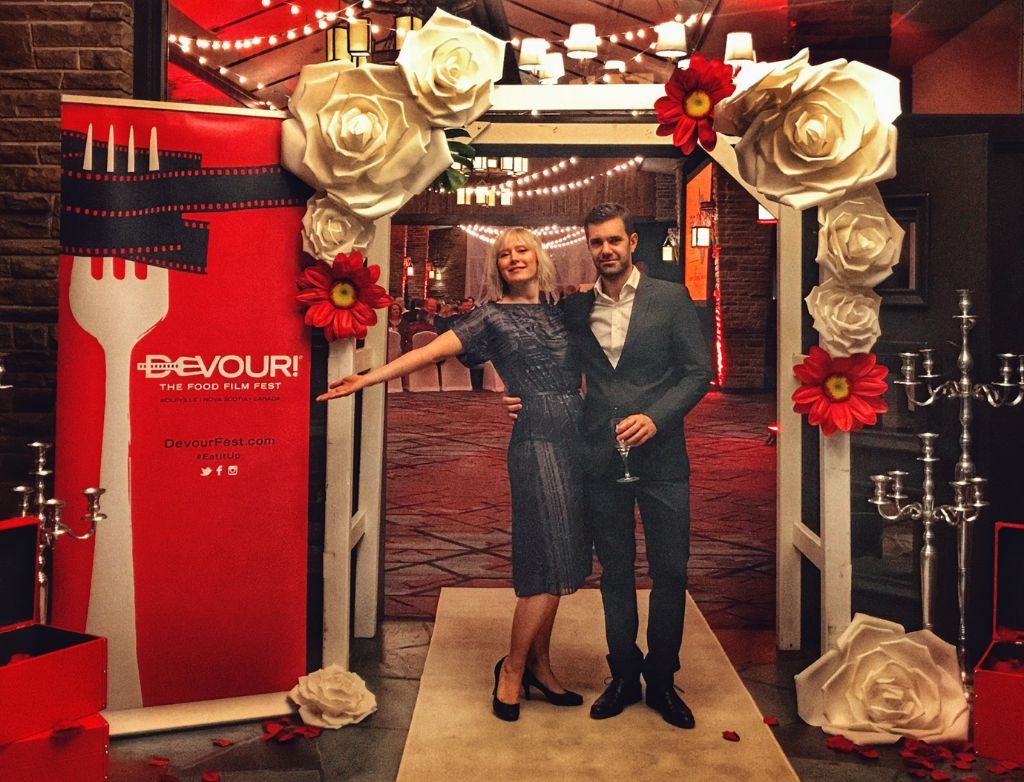 In March, I was invited to attend the inaugural Devour! The Canadian Rockies Food Film Festival at the Fairmont Jasper Park Lodge. Even though my weekend was complimentary, I was blown away by the incredible value of a two-night stay at the JPL including most meals, alcohol, and access to all the happenings of the food and film festival.

Now in its 8th year in Wolfville, Nova Scotia, Devour! is a food and film experience combining cinematic excellence with extraordinary gastronomic activities. Festival organizers chef Michael Howell and Lia Rinaldo have expanded the maritime event to include satellite Devour festivals around the world – including Alberta’s only event at the JPL.

After experiencing last year’s event, I’m happy to pay the $479 for a spot at the 2nd annual Devour! The Canadian Rockies Food Film Festival.  In fact, The Spaniard and I are already booked for 2019! Packages for the 2019 edition at the Fairmont JPL have opened up and space is filling up quickly. Here is what is included:

If you’ve paid for a weekend at JPL before I’m sure you know this package is a great price. Due to the nature of the event activities, capacity for the opportunity to discover a love for food and film (and wine), at the JPL is limited.

The event kicks off with a welcome reception where guests are greeted, handed a glass of bubbly, and split into groups for a three-cabin crawl of some of the signature cabins on the property. Last year we got our groove on at the Carnivore Cabin, where chefs John Jackson and Connie DeSousa of Charcut were literally slicing pig head mortadella into guests mouths to the sounds of Edmonton’s Girls Club DJs.

Next, we found ourselves in the Outlook Cabin (A.K.A. the Queen’s Cabin), where chefs Paul Rogalski of Rouge and Blair Lebsack of RGE RD were hosting an Après Ski party with a never-ending supply of cheese fondue and raclette. I sipped back a sample of Park Distillery vodka, while we were serenaded to a lederhosen clad accordion player (and then I took photos in the room Queen Elizabeth stayed in).

Finally, we were off to an East Coast Kitchen party! Chef Howell was joined by the JPL’s chef Christopher Chafe, where a fiddler and a guitarist had the Gardener’s Cabin hopping. There was everything from lobster rolls to seafood chowder, but it was the oyster bar that won my heart, and my belly. Chef Howell kept shucking so I just kept eating. This stop also had glasses of Nova 7, my favourite glass of bubbly made in Canada!

In case we hadn’t eaten and drank enough over the three hours, there was one more stop. We were led down to the lakefront for a fireside marshmallow roast. There was hot chocolate and creamy liqueurs to keep us warm, and The Spaniard and I got to teach our friends Jose Miguel (also from Spain) and his wife Eugenia (from Argentina), how to make and eat their first ever S’mores.

2. Get up close and personal with the chefs

Saturday lunch involved a chili cookoff, where each of the chefs were vying for our votes for the most innovative and appetizing chili recipe. I was chatting with chef Rogalski, and he mentioned that he remembered talking with everyone he met the night before. With just 125 people in attendance, and events like the cabin crawl and chili cookoff where the chefs serve your food directly, Devour! The Canadian Rockies allows guests to get up close and personal with each of the chefs.

Chef Howell trying to garner votes in the chili cookoff

3. All the tasty beverages

A glass of wine, or more, during an afternoon wine tasting with Benjamin Bridge from Nova Scotia.

From the cabin crawl, to the chili cookoff, to the afternoon of wine tasting, to the bubbles brunch, there were endless opportunities to sample and ask questions to each of the owners and reps. There is hardly a chance to get thirsty at Devour! The Canadian Rockies.

4. Get inspired to eat

Devour! challenges people to think differently and create a deeper connection to food through some of the most engaging documentaries, dramas and short films. At the gala dinner on Saturday evening, we listened to each chef talk about the short film they were paired with, and what inspired them to make our next course. The carefully curated selections were inspiring and so passionate I wished there were more.

Chef Howell prepping his pork belly for the Gala Dinner

5. A Weekend at the Fairmont Jasper Park Lodge

The thing I loved most about Devour! The Canadian Rockies Food Film Festival was that it was at the Fairmont Jasper Park Lodge in the Jasper National Park. The schedule gave us the morning off on Saturday, allowing us to take advantage of our surroundings (we went cross-country skiing) and the amenities (the heated pool and the hot tub!).

We had just enough things to keep us busy, but still enough time to relax, and enjoy the beautiful surroundings at the JPL.

On the Sunday morning we had a bubbles brunch which included a wonderful display of food from the culinary team at the Fairmont JPL. Along with one more short film, and the promise the event would be back for a second year, it was the perfect introduction to the food and film festival.

Devour! The Canadian Rockies Food Film Festival is back Feb 22 – 24, 2019 . If you want to cozy up in the Rockies while you celebrate cinema, indulge in exquisite food & wine, and experience all the Fairmont Jasper Park Lodge has to offer, book before it sells out.

Just in case I haven’t tempted you, here are some more photos from our weekend at Devour! The Canadian Rockies Food Film Festival.