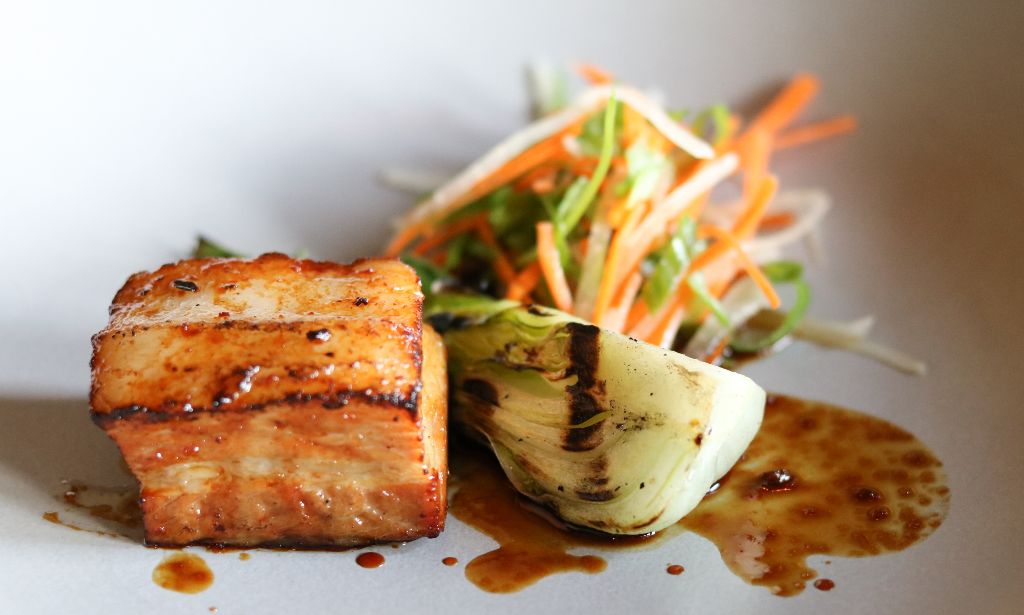 Chef Mridul Bhatt, the executive chef at the Fairmont Hotel Macdonald, has lived in Alberta for just over one year, but already has a knowledge and deep appreciation for ingredients grown, raised and produced from across the province.

After welcoming us to the Taste Alberta dinner, Chef Mridul shared his passion for using local ingredients and introduced our upcoming dishes. Our first course – ‘Rebel Within’, was a 63 degree Alberta egg, was nestled inside an applewood cheddar & jalapeño muffin and served alongside a chorizo tomato sauce. A quick slice with the knife revealed a perfectly runny egg.

Chef Mridul explained that he was inspired by the strength of the egg, and complimented the Egg Farmers of Alberta for what he feels are the best eggs raised in Canada.

Our second course, the late summer Alberta pork yakatori, was served alongside charred bokchoy. I know, I am always biased towards loving the pork dishes, but this truly was the most incredible piece of pork belly. My friend Michelle, who does not like pork belly because it is often too fatty for her, ate her entire piece.

Chef Mridul explained that his team charred the pork belly with an open flame to help give it a smoky taste to the Asian-inspired flavours. My friend Blake said he could have eaten a pork belly steak sized portion it was so good.

For our third course, Chef Mridul found inspiration from his native India. Known as the largest consumer of pulses, India also imports a large number of pulses – primarily split peas and lentils.

Our vegetarian course was served inside a puffed poori. Chef Mridul accented his heritage lentil and chickpea-red kidney bean salad,  with Fairmont Hotel Macdonald honey tzatziki, cilantro mojo, tamarind molasses and pop of pomegranate seeds. The culinary team also made a savoury donut made from white lentils, which was soaked in a yogurt syrup.

I ate vegetarian when I backpacked through India for 2.5 months over 10 years ago, so Chef Mridul’s dish brought back wonderful memories for me. The texture of the crunchy poori combined with so many layers of flavours hidden within made our third course my favourite dish of the evening – and one that I am sure would have impressed pulse farmers from across the province.

Our fourth dish highlighted the versatility of canola oil. Canola parsley gremolata was served alongside cedar wrapped sea bass and a corn tikki (which google tells me is the Indian equivalent to a hash brown). Another stellar dish – and Chef Mridul shared that he is so happy with the flavour, he will be incorporating the canola parsley gremolata in his next menu.

To help celebrate September as National Chicken Month, Chef Mridul and his team served an innovative dish that make Alberta Chicken the star of our meal.

The kitchen marinated the  chickens several times ( and even coated with butter to help seal in the flavour), before being wrapped in swiss chard, and baked inside a layer of red fife dough. Red fife is a wheat variety that was the baking and milling industries’ standard of wheat in Canada from 1860 to 1900. In recent years, demand for the heritage grain has been increasing locally and across the country.

When I spoke to Chef Mridul about his menu, he told me he wanted to create a story about what Alberta is really proud of. Since moving to Alberta, he has learned that this province is not just beef country – and that Albertans need to celebrate and be proud of other proteins like chickens, which are raised across our province as well.

The Harvest Room chefs brought the red-fife crusted chicken into the dining room to be served table side. Each bundle was carved open to reveal the roasted chicken, which were split in two for a generous half-chicken portion, and served alongside spicy green beans and potatoes. The result was a showstopper in the dining room.

Alberta milk may seem simple, but Chef Mridul and his team presented it as anything but. Cracking into my milk sorbet for desssert revealed an inner layer of honey cognac (again made with the honey from the Fairmont Macdonald’s garden bees), and served with pieces of crunchy honeycombs and caramelized milk.

The sinfully sweet dessert completed our Taste Alberta meal in The Harvest Room – an innovative dinner that highlighted the incredible ingredients from across the province available.

I left anticipating my next visit to The Harvest Room, and also wondering how on earth I could replicate Chef Mridul’s pulse dish at home. A huge thanks to Chef Mridul and the entire Harvest Room Culinary team and the Fairmont Hotel Macdonald team (especially Antosh – the food and beverage manager at the Fairmont Hotel Mac), for the work they put in to host and deliver a very memorable Taste Alberta menu.

Thursday, Sept 27, 2018, The Harvest Room is hosting a Honey Harvest Dinner featuring the incredible honey collected from their beehives on site. Click here for more information.