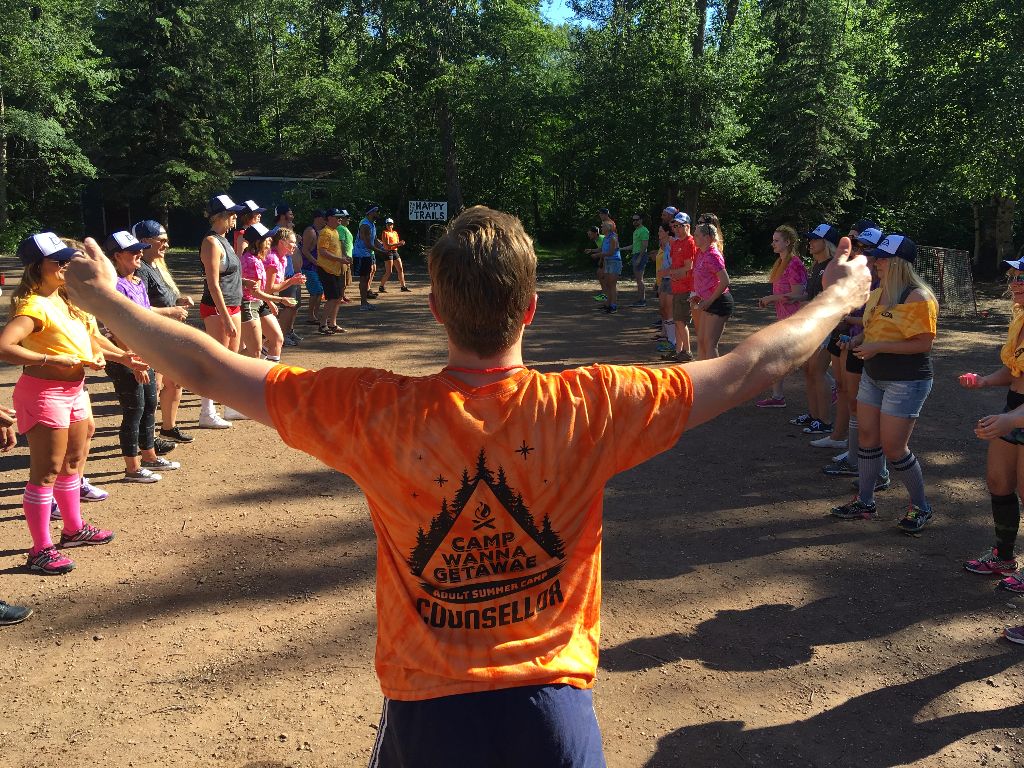 The leaves are turning, the air is getting cooler, and I know that a blanket of snow across Edmonton is on the horizon. Summer is over, and I realised, I forgot to recap this year’s weekend at Camp Wanna Getawae.

Last week I got together with Jon, one of the faithful camp directors and organisers of a local grown-up summer camp held at Camp Yowocas just west of Edmonton. Jon told me the sad news that he and co-organiser Sarah have decided Adult Summer Camp will be taking a hiatus in 2018, and will hopefully make a return in 2019.

I can’t imagine the efforts that went into organising 100 grown ups to take part in a weekend of adult-friendly camp fun – but I hear it was akin to the stress and work of planning a wedding. I am so grateful that Adult Summer Camp – 2.0 happened. Personally, I think it was better than the first year, and i’m not just saying that because I was team captain of the WINNING TEAM!!!

Going through photos brought back so many great memories. Here are 10 things I love about Adult Summer Camp.

1. Camp gear is all about costumes, outfit changes, and retro style

At adult summer camp, the shorter the short shorts… the better! I saw men and women rocking some killer shorts all weekend. I think my favourite was on my teammate Mark – who rocked some tight-ass jean cut-offs all weekend long.

Throughout the weekend we watched as our tie-dye shirts got snipped and restyled into crop tops, layers of fringe, and in some cases – just a vest. Costume changes were abundant; I heard Sarah’s friend say ‘that was two outfits ago.’

Oh… and Des and I busted out some amazing mullets.

the classic string on a spoon relay race

Adrenaline was running high when we all arrived for a weekend of camp. After getting assigned to a room and getting our shirts – we knew what was coming up next – Icebreakers! Just check out the intensity in this video:

Watching a room full of grown-ups give it their all at balloon popping, pass the spoon on a string down your shirt, and my personal favourite – hungry hungry hippo on skateboards – was hilarious! I think I have watched this video 100 times:

DJ Quake made a repeat appearance at this year’s adult summer camp, revving things ups shortly after the ice breakers were done. Thankfully the bartenders were set up in the same room as the dance floor – the tunes he was spinning were so good I didn’t want to even leave for a bathroom break for fear I’d miss a sweet beat. The Spaniard taped Des and I singing/screeching the lyrics to Whitney Houston’s Dance with Somebody – I’m not quite sure how we had voices the rest of the weekend. Must send props to the Barbie girls – I was seriously jealous of those body suits.

This year, Des mixed business with pleasure and brought her staff from The Beauty Parlour. At first glance these ladies (and of course Dean) did not look like they would take the athletic events, but they fooled us all. They rocked the dance floor, held in there during the flip cup competition, and showed up for all camp events. They also created a braid chain – which inspired countless hairstyle changes.

Team Spirit Champion Gavin was the first to make the polar bear dip.

While Lake Wabamun served up some picturesque views – the lake is not exactly out of a Hollywood camp movie. The lake is shallow near the shore, so the polar bear dip (which counted for spirit points), is more of a crotch-level wade. Once again, I was surprised by how many hungover campers showed up.

My teammate Melissa was thinking ahead with the water props.

This year we got in the zip line, high ropes course, archery as well as canoeing. My favourite had to be lounging out on the lake in a canoe – although I’m pretty sure if The Spaniard and I ever signed up for any canoe activity that involved paddling for more than an hour we would break up. I don’t care what he thinks – if you can’t do a basic J stroke you shouldn’t get to sit in the back and steer the canoe!

Jon & Sarah – thank you for reminding us that tossing a water balloon, participating in a potato sack race, and tug-of-war is not just for kids. This year’s competition was intense – and the final leg of the relay race saw some serious leap-frog wipe-outs.

As a non beer-drinker, I was happy to skip out on the beer mile (which saw a few people barfing in the trees during the race).

I refereed this year’s flip-cup competition. The event saw one team eliminated each round – which led to a lot of beer being consumed over 10 rounds. Thankfully, adult naps are fully supported at grown-up summer camp.

Special thanks to Ralph for adding some live music to the flip cup competition.

8 Campfire Sing-Along
This year’s campfire was awesome! There were some truly talented people this year who sang and strummed the night away. Long after the S’mores and hot dog station were cleaned up – Nils started dropping some rhymes – busting out the lyrics to all your favourite 80’s and early 90’s rap songs. Nils – you are amazing!

That’s right – the Cutie Pies wearing the baby blue tie-dye t-shirts took home the trophy, or in our case we each got a bottle of booze, for points we amassed towards spirit points, winning competitions, and for having the last people on the dance floor at Friday Night DJ Quake dance party.

10. A memorable weekend with The Spaniard and friends

The Spaniard and I love all things summer camp – and this year was another amazing weekend. This summer, we brought Adult Summer Camp rookies Angela and Gavin, who ended up being a couple of ringer additions for Team Cutie Pies. This video of Gavin absolutely destroying his girlfriend Angela in a zorb ball still makes me laugh. (If you listen hard you can hear her squeak, and then The Spaniard busts a gut laughing).

Add in Des and the Beauty Parlour gang, all of Jon’s friends I have gotten to know, our new teammates, and super fun and friendly people that Sarah brought to the mix – the weekend was packed with amazing people.

So to Jon and Sarah – thank you so much for organising one of my most memorable weekends of 2017. I laughed my ass off, squealed like a piglet as I ripped down the zip line, and enjoyed gluten-free S’mores as I sat among new friends listening to some very talented people entertain us at a campfire.

Whenever you decide to host another Adult Summer Camp – The Spaniard and I will be the first to sign up!