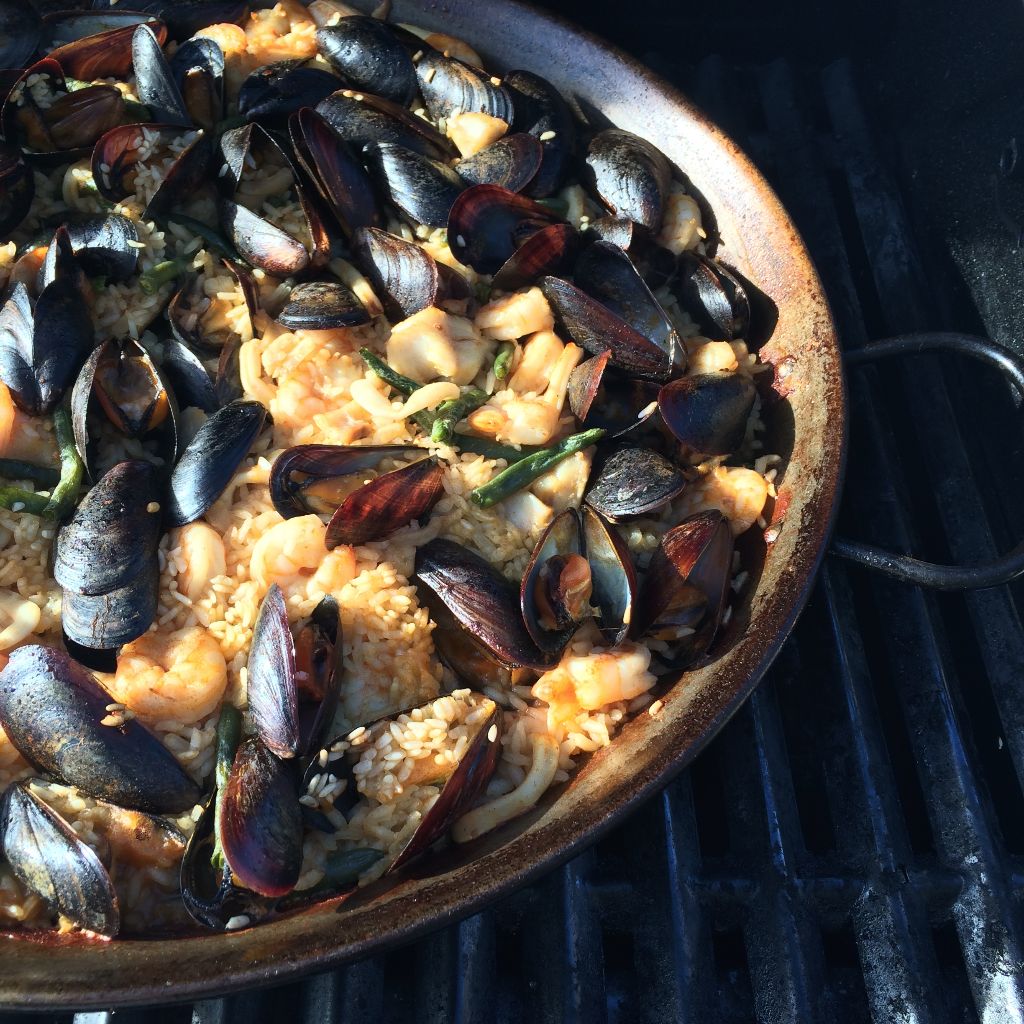 For most Canadians, when we think of Spanish cuisine we think of paella and sangria. I’ve watched for years as my friends or new people we meet interact with The Spaniard – the conversation is often the same. If they have been to Spain it is to Madrid or Barcelona, and if they talk about food, they talk about paella.

The Spaniard is from the north coast of Spain. While you can find sangria and paella at bars and restaurants in Santander, the region of Cantabria is far from the south where the dish and the drink originate from.

Funny enough, The Spaniard only started making paella after he moved to Canada. He brought back a paella (the name for the flat pan the rice cooks in, as well as the name of the finished dish) to Edmonton after his first trip back home at Christmas, and he has been feeding my friends and family paella on the prairies ever since.

Since a paella is to be cooked over an open flame, The Spaniard took advantage of the covered patio at my old apartment to cook paella on the BBQ.

The first time I convinced Linda (Lindork) to come over I did so by tempting her with The Spaniard’s paella.

He had a chance to work on the recipe as the requests started coming in. Together we packed things up and moved from friend to friend’s houses cooking paellas on all sizes of BBQs.

At Casa Kelly & Abe we were in luck – their stovetop with flames meant we could cook inside.

He started with seafood, and then returned to the origins of a true paella – rabbit and chicken. (Thanks to Jaya & Seb for being open to rabbit on the menu).

On more than one occasion he has been asked for a seafood and chorizo – but there is no chance; you do not mix seafood and sausage in paella. (I keep telling him that is the North American version but he will not falter).

Since my friend Michelle is not a fan seafood, he was willing to make an all chicken paella when we visited her house. (Her request for chicken & chorizo received a death glare).

On my first trip to Spain I had the pleasure of eating paella at his sister’s place, where The Spaniard’s brother-in-law (who hails from the south of Spain) shared some tips on how to get the perfect sacaret. The crunchy, but not burnt, bits at the bottom of the pan have become my favourite part.

We’ve brought a few paellas back from Spain for friends and family, and they in turn have started to make it on their BBQs as well.

One day we spotted the same pans in the Italian Centre (along with saffron), so now we direct people there instead of packing them back in our suitcases.

The Spaniard has been a good sport – lugging his paella along with ingredients and homemade brother all over Edmonton (nine houses and counting), and the pan even made a stop at my sister’s cottage in Gull Lake.

I have to say I am quite proud of the The Spaniard. Although he is not from the south of Spain, he has managed to make both a sangria and paella that my friends rave about.

If you want to try making some paella – pop by the the Italian Centre to pick up a paella pan, Spanish paella rice, or some rabbit; Save On Foods also carries a Spanish smoked paprika (pimenton) to help finish off dish.

As his unofficial sous chef for The Spaniard’s paella making on the prairies series, I have watched as the recipe he uses is constantly tweaked and modified. Check out one of these recipes from a Spain Recipes website with a variety of options. Help spread the paella love.