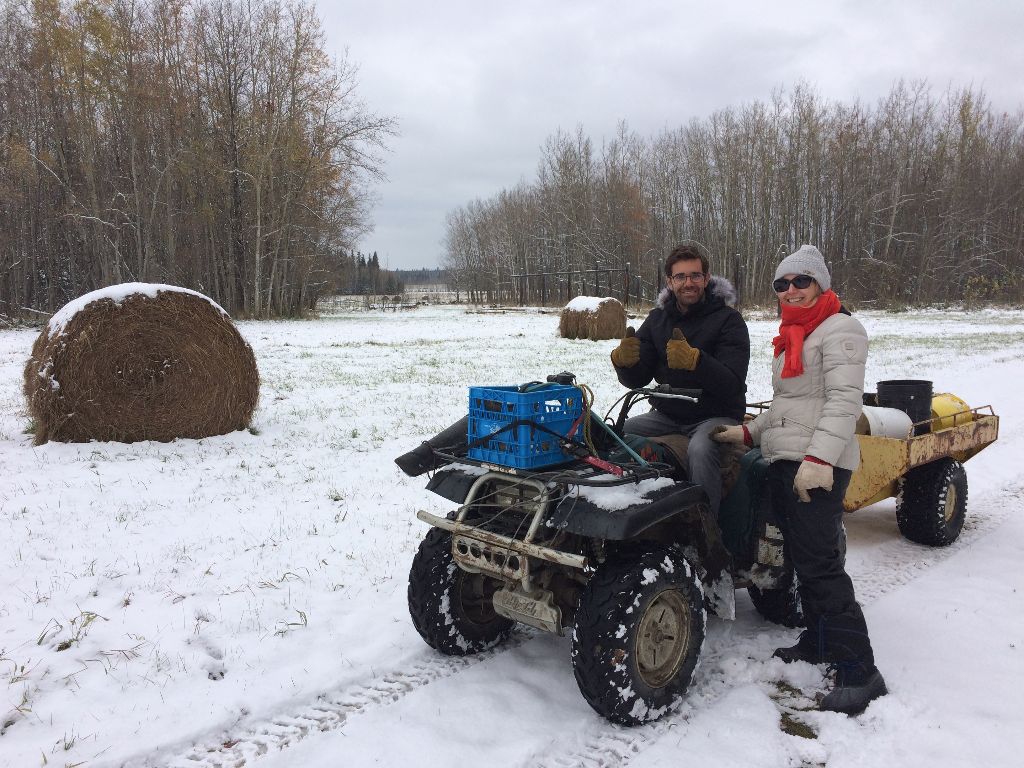 It had been four years since I made the seven hour drive northwest to Worsley, Alberta, where my mother is from, so when I found out that my sister and her family were heading up for Thanksgiving, I thought it was a good opportunity for The Spaniard and I to tag along.

Thankfully my friend Shelly had given me the heads up that Crooked Creek was a must stop on the way towards Grande Prairie. Their legendary donuts, cinnamon buns, and freshly baked buns were enough to put a smile on The Spaniard’s face and make the marathon drive a little easier.

When we arrived we were welcomed by a family of snowmen; while the farmers weren’t happy with the dusting of snow, it appeared my niece and nephew were rather excited.

When my uncle Ernie past away a few years back, my mom inherited the log cabin that he built.

I love that a photo of me at the Worsley Pioneer Days flanked by my uncle Ernie on the right – and my uncle Bobby on the left (both have passed away), is still on the fridge.

Inside the cabin we stayed warm thanks to a fire-burning stove – The Spaniard made himself at home with a pair of moccasins among the basket of slippers.

The weather was mild and we took advantage of the fire outside. I thought for sure we would get a view of the Northern Lights, but unfortunately the sky was cloudy.

Rather than all pile in the cabin, The Spaniard and I were supposed to sleep in my parent’s camper. Since this was so cool – my niece and nephew joined us in the mobile home.

Since my father is a hunter, we went for a drive in search of deer he had a tag for. I don’t think The Spaniard has a stomach for hunting, as he was very happy that all animals larger than him stayed hidden in the bush. We did spot some swans migrating their way south for the winter, and about 5000 Canadian Geese spotted along the fields.

My parents didn’t have a chance to harvest the whole garden before the snow fell so we offered to help. This meant The Spaniard got to drive an ATV/quad for the first time.

My sister and I were on carrot and beet duty in the garden.

The Spaniard got to experience digging up potatoes for the first time – a back breaking activity once you’ve uncovered more than 30 hills in the snow.

My mother joined the fun later – finding more and more treats for him to dig up.

Thanksgiving dinner corresponded with the Blue Jays play off game.

Even though I was stuffed – I still made room for popcorn as the game went on.

The day we left meant we had to sort through which veggies we were taking home. In the end we left with kilos of carrots, beets, onions, garlic, and five different kinds and colours of potatoes. The work in the garden wasn’t even finished – the day we left my mother and father uncovered another 13 – 5 gallon pails worth of potatoes.

As we were leaving we spotted a family of deer on my Uncle Dale’s farm, and then this one hiding in a field.

The Spaniard can’t quite understand why my grandparents settled so far from Edmonton, but the farmland is fertile and the Peace Region of Alberta sure is beautiful. We got to show off the fruits of our labour when we made Spanish tortillas the next week when we served up pink, purple and yellow potato tortillas.