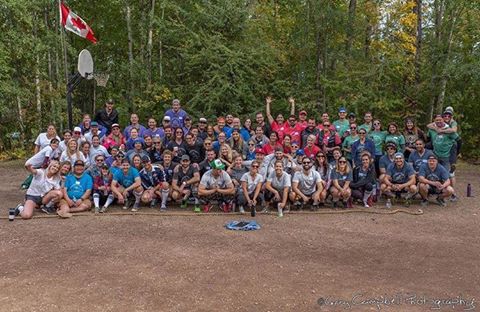 A few weeks back I went to Camp Wannagetawae – a.k.a. – Adult Summer Camp. The event was organized by my friend Jon, along with Sarah, Erin and Sheryl, who created an opportunity for a bunch of rambunctious adults to relive their youth at a kids camp (but with the benefit of adult beverages).

Our home for the weekend was just an hour west towards Lake Wabaman. When Des, The Spaniard and I arrived we were assigned cabins and gift bags containing our team shirt, custom white knee socks and an adult summer camp party pack including prophylactics, ear plugs, cinnamon flavoured tequila and even some Advil.

We met our bunk mates Blaine & Phil (who was up for an impromptu headstand competition).

There was no real dress code for the weekend but 70’s short shorts and 80’s style were in full force. The Spaniard seemed concerned that he didn’t have anything fun to wear. Since I had packed extra,  I offered him a coloured assortment of short-shorts to choose from. Of course he fit my smallest pair (better than I can).

Of course I made the same offer to my new bunk mates. Blaine didn’t have the confidence to have junk on display, but magically I had a matching pair that somehow managed to ‘fit’ Phil.

Everyone gathered in the dining hall where we decided on team names (Purple Reign), we heard the camp rules, and we had a chance to recognize Jon’s 30th birthday.

Jon set the festivities off by demonstrating a solo relay race. It was really just an opportunity for him to show of his expert hula hoop and flip cup with his nose skills.

Next up were a series of minute-to-win-it games between teams. First was the classic vaseline on your nose to move a cotton ball relay.

My personal favourite (probably because this gluten-free girl couldn’t participate and I was laughing my ass off) was a competition to get an Oreo cookie from your forehead into your mouth. Unfortunately one of my teammates was so bad others started tapping his head in hopes of moving that oreo down.

The most entertaining was a timed balloon-popping relay. Our hosts didn’t actually announce there would be extra points for creativity but many of us felt there should be.

Once the games were over we had time to grab some snacks before the keg made its way on down to the fire pit, and campers were free to relax, drink, and get to know one another.

Bright and early the next morning was an optional polar bear dip. I was shocked by the number of people up at 8:30 a.m.

Since the lake is shallow it ended up being more of a crotch-line dip.

There was even a shark sighting.

Meal time in the cafeteria was just like camp when we were kids, except the camp was not used to brewing so many pots of coffee.

The morning was reserved for camp activities that we signed up for in advance. Des, The Spaniard and I set off for the low ropes course – which we thought was going to be an easy activity.

We were wrong. Although no harnesses were required, every activity took balance and core strength. My middle-aged abs were killing me by the end of it.

Since our group was well behaved our camp leader let us go in the giant net – which looks boring until people outside the net start shaking it and you totally get thrown around.

Our next rotation took us to the high ropes course where we were signed up for the giant swing. Through a pulley system, teammates pull you high, and then you self release the rope, allowing you to swing in a pendulum.

Sadly there is no recordings of my ear-piercing scream, but you can watch The Spaniard go for a ride.

After lunch we had an optional rest time (adult nap time) before the team competition started up again.

Tug of war was an eliminator style event. Purple Reign was dominating, but sadly we lost in the final.

It was so much fun, and fun to watch, that our event leaders called for another round.

Thankfully, Ralph brought a trombone to add some drama to the relay.

Once the relays were over, campers filled the free time before dinner with life-size Jenga, basketball, football, and a little battle royal in human bubble suits.

After dinner was supposed to be an optional game of capture the flag but somehow that turned into an epic flip-cup competition where each round one team was eliminated. I cheered hard for the birthday boy, but team red busted out the win in the end.

Although it had been a long day of fun and games, and some drinking, the party was ready to start.

By 9 pm, DJ Quake kicked off a dance party that had all of us grooving for hours.

A keg was firmly rooted in the middle of the dance floor. Had to watch out so guys like Ralph didn’t kick you while doing keg stands in his one-piece Minnie Mouse PJs.

I helped keep the dance floor safe after a few too many sloppy keg stands.

I know Phil, who has a bad knee, appreciated a clean floor to unveil his epic 6 foot 6 dance moves.

I’m not sure who the drunk guy award should have gone to that night? Kelly (pictured below), or the guy who was passed out for two hours in a sofa chair on the dance floor.

After midnight the pizzas showed up. (Hard to party at our age without refueling).

A few people kept partying after that, but most of us decided to call it night.

The next morning saw a lot of campers hungover, but we managed to make it to another round of camp activities.

Gave me a chance to bust out my redneck roots at the archery course.

I cannot thank Jon, Sarah, Erin and Sheryl enough for organizing a weekend at Camp Wannagetawae.

It must have been a challenge to organize 90 adults through team games, camp activities, meals and entertainment for two night, but they did an incredible job. The Spaniard absolutely loved his first camp experience – sign us up for 2017!

For more photos of the weekend check out the Adult Summer Camp slideshow from our professional photographer Greg Campbell.