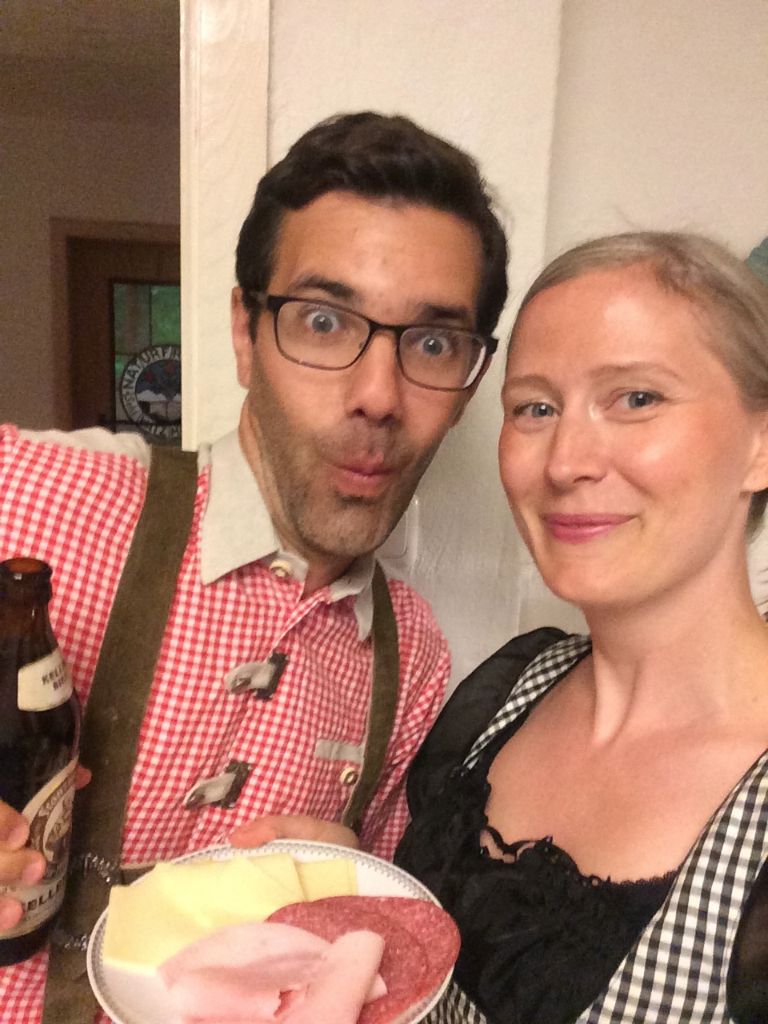 The Spaniard planned his return visit home this summer around his friend Paula’s wedding near Munich. Paula had married her German sweetheart Christoph at an intimate ceremony in Santander back in May, so the festivities in Bavaria were to let both their German and Spanish friends get together and celebrate.

I flew in a couple of days early to meet up with Alex, who I first met volunteering in Swaziland over five years earlier. After over a decade abroad, Alex has returned home to Germany to start a travel business offering designer trips to Africa. I had a chance to hear all about Wanderlust Africa as we walked around Munich, and Alex helped me pick out a traditional dirndl in anticipation of the wedding.

After two days with Alex I went back to the airport to pick up the rental car, The Spaniard, and our new friend Pilar who was flying in at the same time. We navigated our way to Munich to pick up Adrian & Keesha – who we stuffed in the back along with all the luggage for the drive to Kloster Schäftlarn.

While Paula & Christoph had rented a house in the woods that could accommodate 20 people, there wasn’t room for all the guests so we stayed at inn nearby with some of the other guests. I was told that Bavarians wear their traditional dirndl and lederhosen to weddings – so The Spaniard and I dressed the part for the Friday festivities. The waitress at the inn – well she just wears it everyday.

While Team Spain who were attending the wedding had discussed ordering costumes online for the wedding – the plan fell through. The Spaniard and I were the only ones dressed in traditional Bavarian clothing. Never afraid to stick out in a crowd – I thought we looked amazing.

The next day the newlyweds had arranged for a river rafting trip. Six boats of Spanish and German wedding guests floated for hours, drinking beer, getting in water fights, and enjoying the views along the river (including some German sausage).

The wedding party was set for Saturday evening and The Spaniard and I mixed some of our clothes with Bavarian accents for the occasion. (The Spaniard was loving his new leather pants).

Although we were away from the action at times, I was happy we were at the inn in town which included breakfast, our own shower, and a little peace and quiet. I think I am too light of a sleeper to have survived the dorm at the wedding house.

Unfortunately the rains started shortly after we arrived and the party was limited to the house and to bar which was located under a tent on the deck, but caterers had set up wooden tables and benches that gave the space a very cozy feel and the meal was lovely.

The bride and groom welcomed everyone and thanked all the guests for coming to share the weekend with them.

After dinner, including some decadent desserts, the tables were moved and the party started.

The music flipped from salsa to techno, Spanish to English to German – but the dance floor remained busy for the rest of the night. Even the limbo stick (broom) made an appearance.

The bride & groom went head to head in a drinking challenge supported by each one’s countrymen later in the evening. Paula & team Spain won.

The next day following breakfast there may have been some animosity because there was a clear German – Spanish divide of guests. 🙂

Following the clean up & check out a few of us headed to Lake Starnberg for some sunshine and relaxation before flying out.

Congratulations to the newlyweds Paula & Christoph – and thanks for the invite to the wedding party – it was a lovely and memorable weekend in Bavaria.