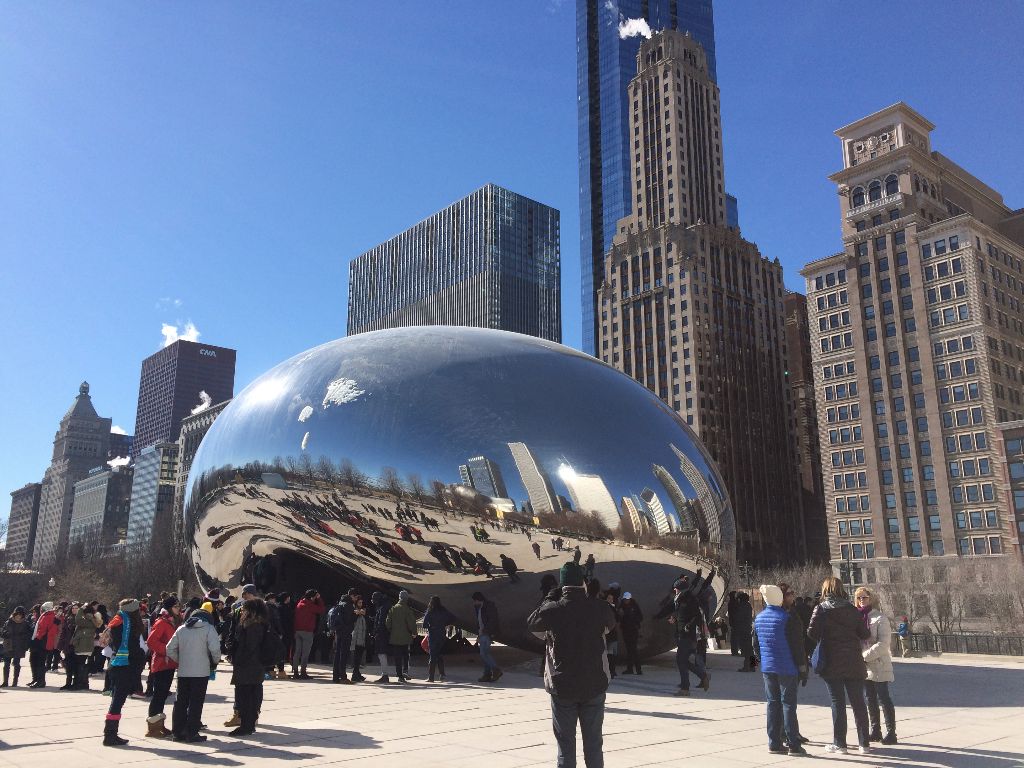 My birthday plans last year were a bust. So, this year, I told The Spaniard two months in advance that I wanted to go away for my birthday; he chose Chicago. I warned him that Chicago was cold in the winter, but he brushed aside my warning. Silly boy – we froze our asses off.

On Saturday (which was my actual birthday) we had a walking tour booked through the Chicago Greeter program. The free service matches visitors with enthusiastic, city-wide volunteers – thankfully our Greeter Susan had a series of places to warm up in during our 3.5 hour tour.

Susan was amazing! We started with a tour of the loop – getting a dose of Chicago’s history and stops a number of architectural and historical landmarks. We also learned fabulous facts like name Chicago is the French version of Native American Algonquion word shikaakwa, meaning stinky onion.

I would have taken more photos but my fingers lost motor skills every time I took my mittens off. Susan finished our tour with a neighbourhood walk through the Gold Coast – pointing out the price on a few properties up for sale. I have my eye on a few properties – just have to win the lottery first.

After a drink with Jen & Jordan, who were also in town, at The Purple Pig we went back to the hotel room to warm up. I was not looking forward venturing out – but since it was my birthday I didn’t want to stay inside either. We bundled up – stopped in at Rick Bayless’s XOCO where I warmed up with a bowl of soup before we headed north to Kingston Mines for some incredible live blues music. Joanna Connor blew us away – shout out to Jaya & Seb for the great Chi-town suggestion.

Valentine’s Day in Chicago was another chilly day – we headed towards Lincoln Park where we walked through the zoo before warming up in the conservatory – my favourite was the orchids room.

It started snowing as we walked over to North Pond – a Michelin Star restaurant housed in what was originally built to be a warming shelter for ice skaters.

I was very excited to receive a personalized menu with a Happy Birthday message.

I’m not a fan of Valentine’s Day – but I really enjoyed our three-course brunch at North Pond.

When we got back outside we were greeted by more snow.

Since we were walking around before and after our brunch reservation it was necessary to dress warm. I really didn’t want to be wearing Timberland winter boots at a Michelin Star restaurant – but I’m also glad I didn’t look like the girl in red who left the restaurant before us. Yes, it may seem fun to wear your red heels out on Valentine’s Day – but not the best idea when it’s freezing cold and snowing in Chicago.

I was excited to spot some Canadian Geese chilling on the North Pond. I figure they are heading north back to Canada because our winter will be over soon.

Sunday night we went to Second City’s Soul Brother, Where art thou? The six person improv show was hilarious! The venue is home to a number of SNL alumni and the show we hit was definitely worth leaving the comfort of our warm hotel for.

We were in town for a three day weekend and our last day in Chicago was a delicious one – we started our morning with an incredible breakfast at Beatrix River North.

The restaurant has a pastry bar filled with gluten and gluten-free treats. The Spaniard shared a cinnamon coffee cake with me that was incredible – so good – you couldn’t even tell it was gluten free.

We took the L train south to Chinatown where we walked the neighbourhood before heading off towards Pilsen. Along the way we spotted this bridge which excited my civil engineer – the counterweights were very exciting.

Pilsen is a neighbourhood in the lower west side of Chicago packed with Latin flavour. We stopped into the Panaderia Del Refugio looking for some tres leches cake – they were out -so The Spaniard settled for another sweet treat. The bakery smelled incredible – I was so jealous.

We popped into the La Casa del Pueblo supermarket where I picked up some corn tortillas for 49 cents (best deal going in Chicago!) We went next door to their taqueria where we shared a cheese and a pork tamale. $1.25 each – I was loving this neighbourhood!

We walked around some more (killing time and burning some calories) before heading to The Girl and The Goat for an early 4:30 pm reservation.

On my first visit to Chicago with my sister three years earlier we tried to get into the Girl and The Goat but they were booked up – so we had a memorable dinner across the street at the Little Goat bistro. This time around I booked early and felt lucky to get a reso.

Our server recommended two dishes per person, but we ordered five along with a gluten free bread order.

We were both more intregued by the meat and seafood on the menu, but ordered a obligatory veg dish. So glad we did because the sautéed green beans in a fish sauce vinaigrette with cashews were amazing.

Our server informed us they now have a dedicated gluten free frier – so I was able to try the goat empanadas served with miso-blue cheese aioli and a squash-apple slaw. So rarely do I get to enjoy crispy crunchy fried food anymore – I loved this dish.

My roomie had insisted that we try the wood oven roasted pig face. I didn’t think it looked like much on the plate – but flavour of pig combined with the texture of the crispy potato sticks and the runny fried egg made this a favourite of The Spaniards.

While I normally favour pork flavours – I really enjoyed the two goat dishes we tried. The confit goat belly was rich and delicious – served with bourbon butter, lobster and fennel.

One of the best things about Girl and The Goat was the people we met seated on both sides of us. When it came to dessert The Spaniard ordered the goat cheesecake after taking a peek at the one that Nicole and Athena ordered (although both Nicole and The Spaniard initially thought it was a goat meat cheesecake and not a goat milk cheesecake). Apparently – the confusion happens often.

We had told our dining companions that we were planning on getting last minute tickets to the Blackhawks game – so they were kind enough to drive us to the United Centre on their way back to the suburbs. Athena even made sure we were heading the right way to find the Michael Jordan statue.

We paid $50 US for standing room – which means you stand behind a red rope with a blocked view of the ice.

We made it 1 period and then moved down to the 6th row where I had scouted out seats in front of the face off circle.

I thought watching the Chicago Blackhawks thump the Toronto Maple Leafs 7-2 was a great way to end our trip to Chi-town. Although the weather wasn’t ideal we still got out to see a lot of the city. Thanks to the Spaniard – for what ended up being an amazing birthday weekend.