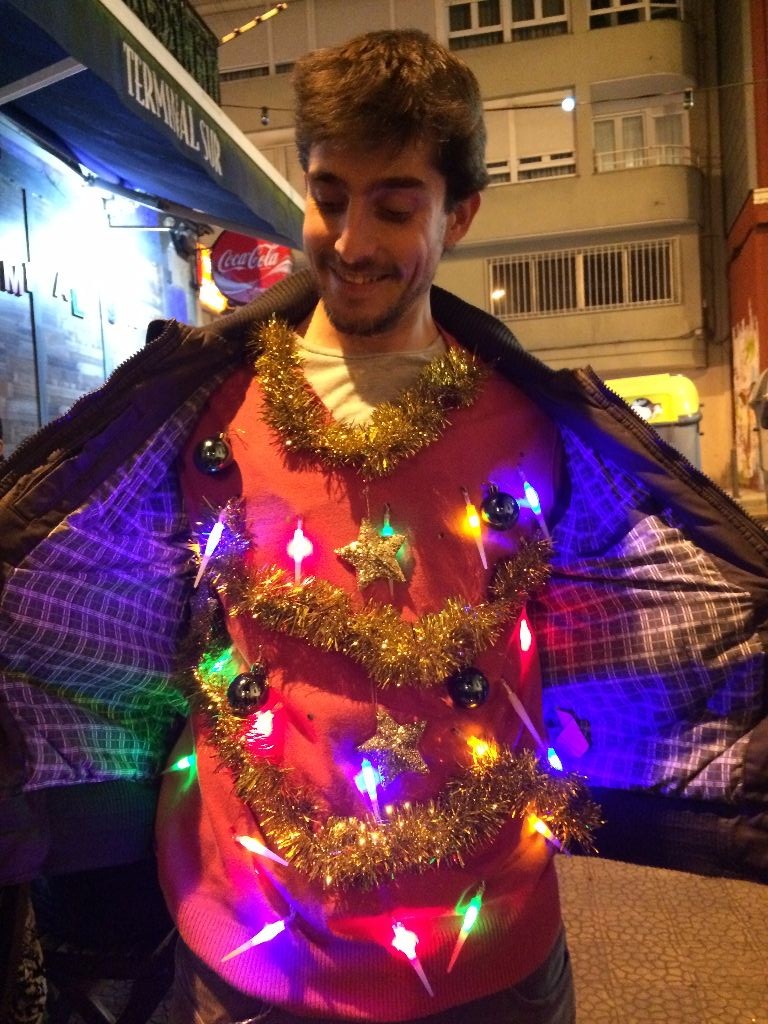 This past holiday season I traveled to Santander, which is straight north of Madrid on the north coast of Spain, to spend Christmas with The Spaniard and his family. The trip involved lots of family meals (with loads of seafood), and time for aperitivo’s and small bites with friends. It certainly did not look like the Spanish recession had hit Santander – the streets were packed with people drinking, eating and shopping.

Our first full day in Santander was on December 24, and we met up with The Spaniard’s school friends at noon. We bar-hopped along with the masses for almost nine hours before making our way home for dinner.

Clearly this green Massimo Dutti is on trend this year

Back at The Spaniard’s parents place we had a Christmas Eve dinner with his two sisters, brother-in-law, and two nephews.

We brought the Spaniard’s father a bottle of Crown Royal Northern Harvest – which had just been named 2016’s #1 whiskey in Jim Murray’s Whisky Bible.

Like The Spaniard’s nephew Dani I couldn’t wait for a bite of jamon. (I still don’t understand why I look like a tourist yet this blonde-haired boy is 100% Spanish).

I was introduced to Turron – a traditional Spanish treat made from almonds and honey. It came in a variety of flavours and textures – I was a fan of this gluten-free sweet.

Christmas day involved a walk on the beach and a late lunch with family (late for this Canadian – normal time for a Spanish lunch).

In addition to more seafood and jamon – a one-month-old piglet was on the Christmas menu.

December 26 was all about the friends. First, I joined the sausage party for a quick trip to Lierganes where the boys enjoyed some chocolate con churros.

We had time for a quick costume change before meeting up for their annual friend’s Christmas dinner. Each year involves a theme, and this year was tacky sweaters -some were homemade, some were his & hers, some here Christmassy, and some were just tacky.

After dinner it was time for more drinks – and some sweater swapping.

There was also a lunch with The Spaniard’s university friends – most of who I met at Javi & Sole’s wedding this past summer.

I was the solo chica for another trip with the boys as we ventured up to Los Tojos for some cocido montañes and mountain view.

There were many laughs over many drinks over the holiday season, except for when I had to go play paintball in an abandoned building in the middle of nowhere and I got shot in the ass. I was not laughing then.

Most of our meals were at The Spaniard’s parents place where there was plenty of jamon, seafood, and even traditional stews from the north of Spain.

The Spaniard’s nephew Pablito has the widest eyes ever – I was able to capture a few photos before the terror and tears set in and he wanted back to his mother’s arms.

In Spain, Santa does not bring children gifts on Chistmas Eve. He must fly on over because los ninos open presents on January 6th – gifts left by the Tres Reyes, or three kings, to symbolize the gifts brought to baby Jesus by the three wise men. This parking lot tragedy made me think that Santa wasn’t very welcome in Spain.

Santa can be a little creepy; apparently in Spain – they are much more comfortable with three men coming into your home.