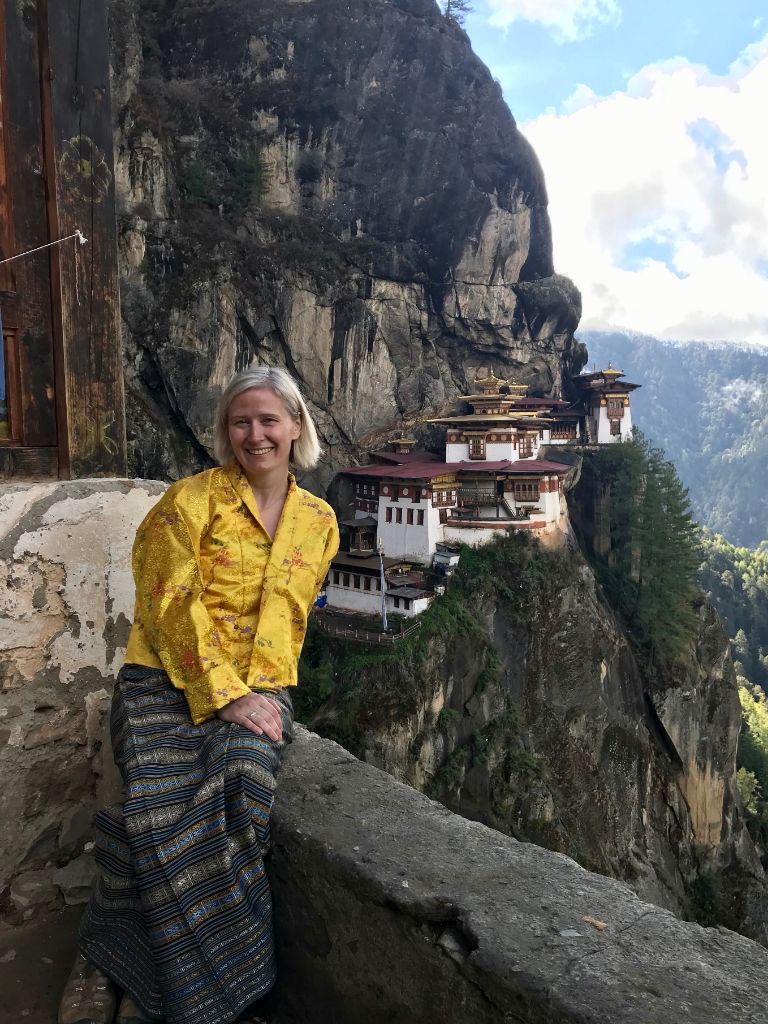 In 2019 I booked a trip to Bhutan last minute, on a whim, or as some might describe as an impulse purchase. To be perfectly honest, it was a response to a meltdown over a disappointing birthday.

I entered my 30s by celebrating my 30th birthday in Rio de Janeiro during Carnival. I realized a little too late that I wanted something memorable to mark 39 – my last year before the big 4-0.

So, six weeks after my birthday, I found myself with a problem that many people would love to have. I learned that I had too many vacation days that I couldn’t carry forward and I had to come up with a plan to use them.

And then I found a way to burn through some vacation… a discounted G Adventures 10-day Wonders of Bhutan trip leaving in less than a month.

Bhutan is not exactly easy to visit, nor is it economical.  Known as the last Shangi-La, I didn’t see my first images of the small land-locked country in between India and China until I was 24. I added it to my travel wish list, but the price had always deterred me from seriously considering it.

As someone who has grubby backpacked on a budget literally around the world, spending less than $10 (Canadian) per night in hostels, guests houses, and hotels in Asia, South America, Eastern Europe and Africa, Bhutan’s $250 USD daily visa fee had always been a barrier for me. The country limits the number of tourists each year and requires visitors to fly direct from less than a handful of countries – making the international travel arrangements even more difficult.

Bhutan is not a country that allows cheap backpackers hopping from hostel to hostel. All visitors have their visa arranged by a tour company. I’m not one for package holidays, but solo travel doesn’t really exist in Bhutan – you’re expected to be chaperoned by an official guide throughout your stay.

Once I found the deal I had to act quickly to ensure G Adventures could get me a visa. Very quickly, I managed to blow $7,000 Canadian in just a few hours in this order by:

In comparison – I spent $10,000 Canadian traveling South America over seven months. The price was a hard pill to swallow, but in the end, I didn’t regret spending the money. I had an incredible trip to Bhutan and absolutely resolved my birthday blues. Here are nine reasons why I felt Bhutan was worth the price of admission:

Thankfully our guide Kinley got us up early and we started climbing by 6 am. We had the entire route to ourselves, and did not start seeing other tourists until after we had already visited the monastery and were making our return down. The cloud-covered views as we ascended were breathtaking, and having the climb limited to our eight-person group made it even more memorable.

2. MEETING THE KING AND QUEEN OF BHUTAN

When we unloaded from our travel van to begin our hike up to a temple, our guide was approached by men driving matching black SUVs who told him the King was arriving shortly. I wondered if we would still be able to climb, but it didn’t seem to be an issue.  We were invited to stay during the ceremony, but we could not take any photos.

Joining approximately 50 locals, we were asked to line up as the Royal Family walked past into the temple. As they passed, the crown prince pointed at our group and whatever he said made the family laugh. The King went in for a few minutes and when the family exited the temple, the King of Bhutan came straight up to our group and said, my son loves the Green Lantern.

My tour-mate Rick (also originally from Edmonton), was wearing a shirt with the Green Lantern logo that caught the young prince’s attention. What followed were multiple conversations with the King and Queen of Bhutan, as well as the Queen Mother, about where all of us were from, how long we were here, where else our tour went, and how much the prince and his cousins loved the Green Lantern.

Although the royal photographer never posted any pics (for days we all stalked the King of Bhutan’s social media pages), it was certainly a highlight of the trip.

From Dzongs to Chortens, from temples to Buddha statues – Bhutan is packed with cultural architecture.

While the Tiger’s Nest Monastery may get most of the glory, awe-inspiring architectural sites are abundant across Bhutan. Dzongs, or fortresses, and their towering exterior walls surrounding a complex of courtyards, temples, administrative offices, and monks’ accommodation were humbling to walk through. An added bonus of my April departure meant the blossoms along the river next to sites like the Punakha Dzong made for stunning scenes.

The Memorial Stupa, also known as the Thimphu Chorten

I felt like a teenage girl giggling in sex-ed class, but the phallic imagery, statues and décor across Bhutan never failed to bring a smile to my face. The images of ejaculating penises painted on the walls of houses seems a bit of a contradiction for a country that some would argue is closed and conservative.

The 15th-century arrival of an eccentric Tibetan monk named Drukpa Kunley, or the Divine Madman, seems to be the cause. Throughout our time in Bhutan we heard stories about how he received a white scarf as is the traditional greeting, and promptly put it around his genitals instead. The Divine Madman pledged to rid the people of his conventional ways and seemed to be a free spirit – eating meat and enjoying sexual exploits.

The carved penis hanging from the rear view mirror of our van was said to keep us safe, the propeller shaped penises hanging from houses were said to ward to evil spirits and trash talk from your neighbours. My travel roomie Kalpna and I posed in a fertility garden with four-foot penises.  It was such an unexpected treat and I never got bored with the statues, paintings and imagery.

As a side note, the Divine Madman is also credited with the creation of Bhutan’s national animal. Legend has it the takin was made when The Divine Madman stuck the head of a goat onto the body of a cow. Our guide Kinley added in a visit to a sanctuary to see the awkward mammal outside Thimphu when we asked about the unique mammal.

Some of my travel friends mock me for my long-time love affair with Lonely Planet, but reading the side notes has resulted in some pretty fun and random adventures over the years. When I learned that you could make your own postage stamps at the national post office in Thimphu, I couldn’t wait to share the news. Two people on my tour, Kalpna and Rick, arrived a day in advance with me. With an afternoon to explore in Thimphu, I suggested we visit Simply Bhutan, an interactive cultural museum where we could pay extra to wear traditional clothing. Kalpna was game – and together we posed for photos which we used to make personalized stamps that went out on all the postcards I sent. I can’t think of a better souvenir.

6. THE DAILY FEE INCLUDES 3 MEALS, ACCOMMODATION
AND YOUR GUIDE

What I didn’t realize when I learned that Bhutan had a $250 USD daily visa fee, was that it includes accommodation, three meals, and a guide. Bhutan is expensive to get to, but once I paid for my tour, I didn’t spend much money in Bhutan.  I also read that the daily fee reduces for visitors staying longer than one week – which may be why the 10 day tour wasn’t that much more than some of the 5- 7 day tours I saw.

Our G Adventures guide and driver

Bhutan remained closed to foreigners until 1974, and since opening the door, tourism has remained minimal compared to the rest of Asia. The Bhutanese government is aware of the environmental impact tourists have, and restricting tourist activity to sustainable levels made the experience more enjoyable for me once I arrived.

The only day where it felt ‘touristy’ in Bhutan was the day we visited the Tiger’s Nest Monestary, but as I mentioned above, our guide Kinley had us set off early and we avoided all tourists on our hike up and during our visit of the temple.

The Kingdom is certainly committed to preserving the culture. From the school we visited that teaches traditional arts, to the dance performances with regional dress, to the monk we met who shared how the country measures gross domestic happiness – our trip felt like a time-warp back through a retro issue of National Geographic.

I have taken in sporting events during my travels around the world, but I don’t think I have seen anything as unique as an archery tournament in Bhutan.

Teams, dressed in traditional clothing, compete to hit targets over a distance of 145 meters. The strange part is that the opposing team stands next to the target that is being shot at. Each player has to pay close attention as the risk of getting shot by an arrow is totally plausible. The teams sing and dance, celebrating shots on target, and tease or mock the opposing team on their misses. My anxiety level went up just watching – an archery tournament in Bhutan is quite a spectacle.

Apart from a candid photo I discreetly take, I most often ask permission to take a photo of someone while traveling abroad. Each time I asked, or pointed at my camera to ask permission, the answer in Bhutan was always yes. Whether it was the young girls dressed in traditional clothing departing from school or the people we saw spinning prayer wheels at a temple – I felt invited to capture the incredible images I saw of people experiencing life across Bhutan.

The country is bursting with colours. From the traditionally clothed people going about their day, to the gold-laden Buddhas, to the intricately designed temples, to the valleys draped with prayer flags – Bhutan is a photographer’s dream.

Booking a tour and flying to Bhutan is expensive, and that daily fee is likely a deterrent for many travels, but the limited travel imposed by the Bhutanese Government makes a journey through the Land of the Thunder Dragon feel even more magical. At times, it felt like we had the whole country to ourselves.

For me, Bhutan was certainly worth the price of admission.

* If you fly from Nepal you can get the added bonus of a fabulous view of Mt Everest.