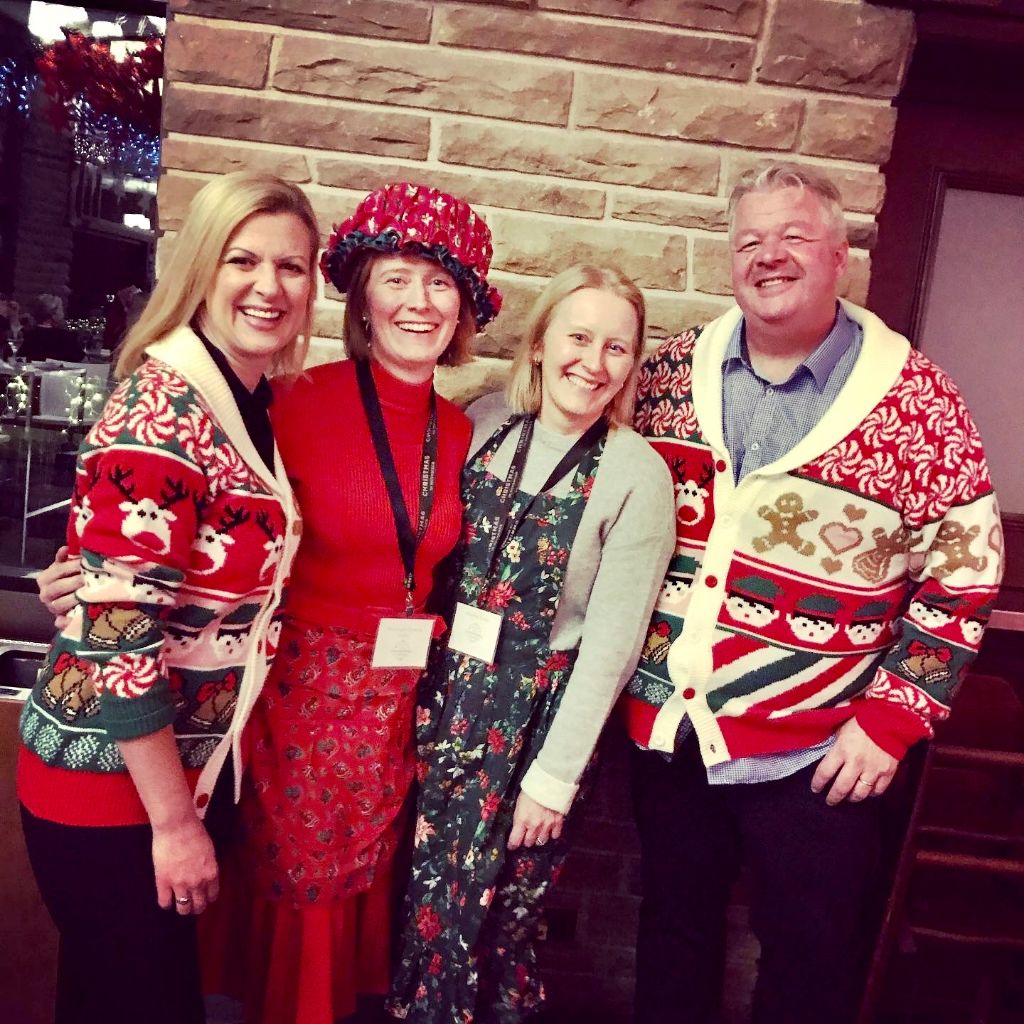 Christmas in November (CIN) at the Fairmont Jasper Park Lodge (JPL) celebrated 31 years last month, and chefs Anna and Michael Olson have been there for 15 of them.

As a contributor to Alberta Pork’s Passion for Pork initiative, I’ve had the privilege of attending Jasper CIN for the past seven years. I, very excitedly, get to introduce chefs Anna and Michael Olson’s culinary sessions, which have most recently been sponsored by Alberta Pork.

During the 10 day event I watch their sessions daily, and while I watch them teach the same recipes on repeat, I always manage to learn something new. Between Michael’s dad jokes and Anna explaining how the holidays are all about winning, the dynamic duo always share noteworthy culinary tips and tricks that have impacted how I spend time in the kitchen.

Here are ten things I’ve learned from chefs Anna and Michael Olson at Christmas in November at the Fairmont Jasper Park Lodge:

1. HOW TO COOK PORK BELLY PERFECT EVERY TIME

The most influential recipe that Michael Olson introduced me to is his double roasted pork belly. It takes some minor planning to prep the meat the night before, but this double-roasted delight is one of the simplest and most rewarding meat recipes I have in my repertoire.

This recipe makes the best pork crackling imaginable. I can hoover slices of this on its own, but I also really enjoy it with an Asian dipping sauce in lettuce wraps. Michael praised me on my ingenuity at JPL CIN 2018 when I use his chicken wing sauce (made of a ratio of 1:1 melted butter and Frank’s Hot Sauce) that was leftover in a chaffing dish as a crispy pork belly dip. I hate food waste and I just couldn’t imagine that butter sauce going to waste.

2. EVERYONE MAKES MISTAKES IN THE KITCHEN –
INCLUDING ANNA OLSON

Picture-perfect dishes on Instagram and pintrest may inspire some to cook, but for many the pictures can be intimidating and discourage would be cooks and bakers from even attempting to make the dish for fear of what the final product may look like.

If you’ve watched Anna Olson on Food Network Canada you know that her food does indeed look picture perfect, but perfection in the kitchen is a myth.

Anna shared a story at CIN about a cake she was recipe testing on friends coming for dinner. She was so focused on getting the frosting just right, that she forgot to take the parchment paper off the bottom of the cake layers. As she went to slice the cake in front of her guests, her knife got stuck on the paper. She had to take the cake back to the kitchen and did her best to shimmy out the parchment from each layer. With a smile, she shared that evening she served the mashed up cake as trifle instead.

So often I am worried about what the final product looks like, but I’ve learned that people I invite to my dinner table seem to be so appreciative of a home-cooked meal or from-scratch cake, they don’t care what it looks like.

We’re all bound to make mistakes in the kitchen, so get over your fear of baking and remember that even chef Anna Olson flubs up.

3. APPETIZERS SHOULD BE ONE BITE

Michael has a very strong opinion on appetizers and finger food; a pre-dinner snack should be just a bite (two at most), and nothing that is going to crumble, fall, and stain your shirt. This philosophy cuts down on plates and cutlery and a cocktail napkin or toothpick should suffice.

Check out Michael’s recipe for Super Mario Meatballs or Anna’s bacon cheese puffs for ideas on one-bite wonders for your next evening of entertaining.

4. HOW TO SAVE OVER WHIPPED EGG WHITES

Did you get distracted while your egg whites were on the stand mixer and now they’re stiff, stretched to their limit, and lost their luster? Anna Olson has a trick save over whipped egg whites. Don’t throw them out and start again. In the time it takes to make and enjoy a cup of tea, the egg whites will have deflated and you can hand stir them back to the consistency for a soft whipped peak.

5. A SPATULA IS A $1 MILLION KITCHEN TOOL

Chef Michael Olson, who has been a chef professor at Niagra College’s Canadian Food and Wine Institute for the past 19 years, shared that he tells his students a spatula is a million dollar tool. A spatula helps ensure you can scrape everything out of the bowl and into the cake plan or onto the plate. For culinary students, Michael assures them that tool can help them save a million dollars’ worth of ingredients from the bowl over the course of their career.

I never grew up using a spatula as my mom was a wooden spoon user (who let me lick the cake bowl out). But as someone who hates food waste, I took Michael’s message to heart. Today, i’m pretty sure my spatula is the most used tool in my kitchen.

6. THE HOLIDAYS ARE ABOUT INCLUSIVITY –
INCLUDING BAKING FOR YOUR GLUTEN-FREE FRIENDS

I’d like to think that Anna chose to share a gluten-free gingerbread cake at JPL CIN 2019 because she knows I’m celiac, and she wants to make sure I have something to sample at the end of each of her culinary sessions. But, it is more likely she wants to give CIN guests a recipe for gluten-free friends and family members that everyone can enjoy.

Apparently she even tricked Michael, who had no idea this holiday spiced cake was gluten free. As with most GF baking, this cake is best served day of, or eaten the next day. Gluten-free baking does not have a long shelf life. (However, if this does happen to be a few days old I’m sure it it could be used to make a tasty GF bread pudding).

Hailing from Foam Lake, Saskatchewan, Michael often shares highlights from the province he was born and raised in. Saskatchewan is the largest producer of mustard seed in Canada, about 75%, and the French buy approximately 70% of the annual Canadian production. Most often, the seeds are prepared in Dijon, France, and then shipped back to Canada at a premium price.

8. YOU DON’T HAVE TO MAKE EVERYTHING FROM SCRATCH

Don’t feel guilty about buying that frozen puff pastry. I’m sure you would expect Michael and Anna Olson to make every dish with ingredients made from scratch, but the duo have shared tips in their session on how to make life in the kitchen easier.

This year I learned that Anna makes puff pastry once a year. She packages it and freezes it, and when she has run out, she buys it in the store like the rest of us. (Look for the kind made with butter).

I’ve learned loads of sauce tricks from Michael that involve processed items available in the store.  In addition to the his chicken wing hot sauce (half melted butter, half Frank’s hot sauce) mentioned above, Michael has a simple yellow BBQ sauce made with:

My early childhood memories of egg nog are not pleasant or positive. As I got older, the addition of run to the carton mix sold in grocery stores did nothing to improve my opinion of this holiday beverage.

That was until I tasted Anna Olson’s crème brûlée eggnog. Perhaps it is the full cup of whipping cream used to make this calorie-packed drink, or perhaps it is just the magic of Anna Olson, but this recipe is incredible.

I adore Anna’s fashion style. She always looks so polished and I look forward to her outfits at Christmas in November each year. Anna Olson takes a lot of photos with CIN guests and she certainly knows how to strike a pose. One trick she shares at the end of each of her sessions is how to stand and contort one’s body for a flattering photo. I used her point the toe and turn the torso trick successfully for years. I don’t want to take the credit for her secret… you’ll just have to attend CIN to learn firsthand.

SET FOR THE HOLIDAYS & LIVING HIGH OFF THE HOG

Their time at Christmas in November has certainly impacted their recipe development for the home cook or baker, and I love amassing a collection of their recipes. Both Michael and Anna have new cookbooks that would be a great gift for the holidays – Set for the Holidays and Living High Off The Hog.