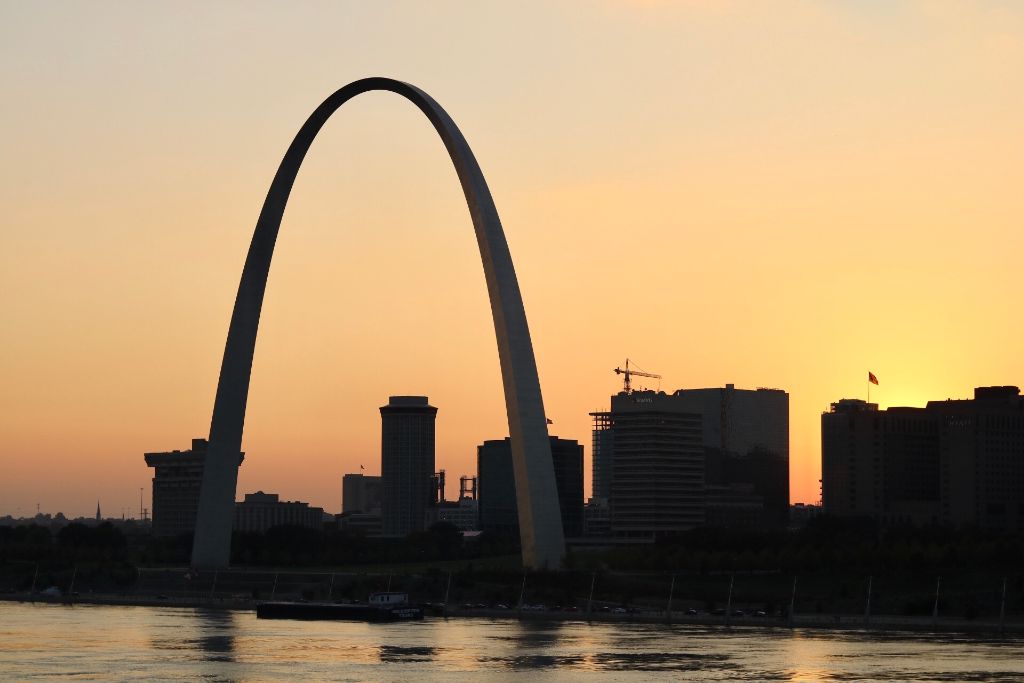 For the past few years we have traveled south of the border to celebrate The Spanadian’s October 16th birthday by taking in a basketball game on the NBA’s season opening weekend. This year, the league started later, so he offered up the opportunity to check out a hockey game (for me) instead. Using a search from Edmonton on the weekend we wanted to travel, he found return flights to St Louis for $420 (Canadian). When asked if I wanted to go to St Louis I replied, “sure.”

I didn’t know much about St Louis, but the prospect of watching the defending Stanley Cup Champions, the St Louis Blues, and checking out a new city sounded good to me. After a bit of research, we found more than enough things to keep us entertained. We had an absolutely amazing weekend filled with great food, fun activities, a dose of history, and a view from the top of the tallest man-made monument in the United States.

From the time we left our Air BnB to start exploring to the time we jumped on the metro back to the airport we had exactly 72 hours in St Louis.  We relied entirely on a St Louis metro pass and by walking.

HERE ARE 10 THINGS TO KEEP YOU BUSY IN ST LOUIS

* Before I upset anyone I would like to point out that a highlight of St Louis is said to be enjoying the beer. As a Celiac I don’t drink beer, nor do I like the taste of gluten free beer, so it isn’t in my top ten of things to do. Everyone we spoke to said that St Louis is a drinking city, and with a long history of Germans who settled there, the culture of beer is prevalent throughout the city. I wanted to see the famous Clydesdale horses on the free Budweiser tour of the Anheuser-Busch St Louis Brewery, but we ran out of time. From what I read, opportunities for beer tours abound a craft breweries around the city. When in St Louis – drink up.

1. View the city from the top of the Gateway Arch

Designed by Finnish-America architect Eero Saarinen, the Gateway Arch commemorates the westward expansion of the United States. At 63 stories tall (630-feet/192 m), the symbol looks stunning from viewpoints across the city. Completed in 1965, rides to the top in eight-pod trams take four minutes to complete.

The five-seat elevator pod built in the 1960s looks straight from a Bond film.

Guests can spend as much time at the top viewing the cityscape through 32 windows. To be honest, I had no idea we could travel up the monument. When we learned this at the visitor center we were told that the tram can sell out so we bought our tickets in advance ($12 USD) for our final day in the city, and made sure to give ourselves enough time to view the museum (which is free).

Even if you can’t fit in a ride to the top, I recommend giving yourself time to enjoy the Gateway Arch from the riverfront. We took the Metro across the river and walked back along the Eads Bridge at sunset, which made for a spectacular view.

2. Cheer on the St Louis Blues at a hockey game (or the Cardinals if it is baseball season).

We bought resale cheap seats for the top of Enterprise Square the day before a St Louis Blues Saturday matinee game, and at $81 (USD) the tickets were less than what we would pay to watch the Edmonton Oilers back home. I found the fans passionate, the in-game entertainment amusing, and the chirps from the peanut gallery around us hilarious. I’m sure if the Blue are out of town, catching the game at a bar would be entertaining as well.

* Once the Cardinals made the second round of the playoffs we bought tickets to game 6 and fully expected to watch a baseball game on our first day in St Louis. Sadly the cards were swept by the Nationals and we didn’t get to go. We did walk by the stadium and it looked incredible – I would definitely get tickets if we were in town during the ball season.

3. Lick your finger clean at a BBQ joint

I ate BBQ every day I was in St Louis. On the suggestion of my old roomie Marc, our first meal in St Louis was at the famous Pappy’s Smokehouse. The vibe was cool and the pulled pork and brisket were tasty, but it was our visit to Bogart’s Smokehouse the following day that had us raving about ‘those ribs’ for the rest of the weekend. We tried Sugar Fire as well, but we enjoyed the first two stops more. During our travels around the city we spotted or smelled numerous BBQ joints – there are likely loads of hidden BBQ gems across the city to experience.

4. Admire the Architecture on a Historical Walking Tour

At just $10 a person, our 2.5 hour east downtown Landmarks Walking Tour was the best deal of the weekend. Our 77-year-old guide Rich didn’t stop talking or walking the entire time – he just had too much to tell us and show us. From the old courthouse to the Gateway Arch and over to the old post office, we learned about the famous Eads Bridge, (which was admired greatly by my civil engineering boy toy), admired the lobbies of buildings transitioned into hotels, and learned an incredible amount of historical and architectural details about downtown St Louis.

The lobby bar at the Hotel Saint Louis

5. Score a retro find at a Vintage or Antique Store

In recent years, I’ve started to pick up a vintage dress or piece of clothing from my travels throughout Canada and abroad. St Louis was an affordable gold mine of fabulous vintage clothing. Less than two blocks from our AirBNB in The Grove was May’s Place, and it took me all of 10 minutes to find multiple vintage finds I would have loved to come home with. I ended up returning to May’s to pick up a great winter coat, and I also picked up  a vintage dress from Avalon Exchange in the Delmar Loop,  and another at Remember Me Vintage Clothing in Soulard. If we had time, I would have loved to visit Cherokee Antique Row.

6. Take in the St. Louis Symphony

The St Louis Symphony Orchestra is the second oldest symphony in America, and the building they perform in is absolutely breathtaking. We took in the afternoon performance of Rachmaninoff’s Symphonic Dances, sitting fourth row on the floor for $38 USD (for two tickets). Their new Music Director Stéphane Denève was well spoken and animated throughout the performance. Watching the SLSO was a highlight of the weekend.

8. Have a beautiful day in a St Louis neighbourhood

Enjoying a Vincent Van Doughtnut in The Grove

Outside the downtown area, St Louis is stacked with must-visit neighbourhoods packed with restaurants, bars, live music venues, shops, and of course, more history. Our stay in The Grove had us close to the metro line as well as a cute coffee shop (Rise Coffee House), donut shop (Vincent Van Doughnut), and Nepalese restaurant (Everest Cafe & Bar) offering gluten-free fare.

Rise Coffee in The Grove

We also checked out the Delmar Loop (where I enjoyed watching Fitz’s root beer get packed using vintage bottling equipment), The Hill, Soulard, and South Grand. Our best brunch was enjoyed at Polite Society in the Lafayette Square neighborhood of St. Louis.

9. Get inspired by indoor and outdoor art

For a city that is so committed to sports, I was surprised by how accessible (meaning free) and visible art galleries and public art was throughout the city. Before our St Louis Symphony performance we had time to wander through the Contemporary Art Museum of St. Louis (free). On our historical walking tour we passed through the Citygarden Sculpture Park, and we made the effort to come back to visit and take more photos. Eros Bendato, a massive sculpture by artist Igor Mitoraj, is one of the many pieces of art scattered throughout the urban park – when I saw a kid walking out of the head I couldn’t wait to come back to snap a pic.

10. Listen to the Blues… seven nights a week

St Louis is famous for live music and our walking tour guide affectionately mentioned you can listed to the Blues seven nights a week. Whether we were walking by famous venues like Blueberry Hill (or the Chuck Berry statue) in Delmar Loop, or hearing a live band playing from the patio of a bar in Soulard, it was hard to ignore the vibe throughout the city. We popped into BB’s Jazz, Blues and Soups where The Spanadian enjoyed the southern menu of gumbo and blueberry crumb while a local band belted it out.

As I mentioned previously, we managed to do everything by walking and using public transit (Metro and bus). We found St Louis a very safe city to walk around and the people incredibly friendly and polite. I never got tired of admiring (or photographing) the St Louis Gateway Arch. I’ve been gushing about your trip since our return and recommending it as a weekend away – St Louis surprised me in all the best ways.