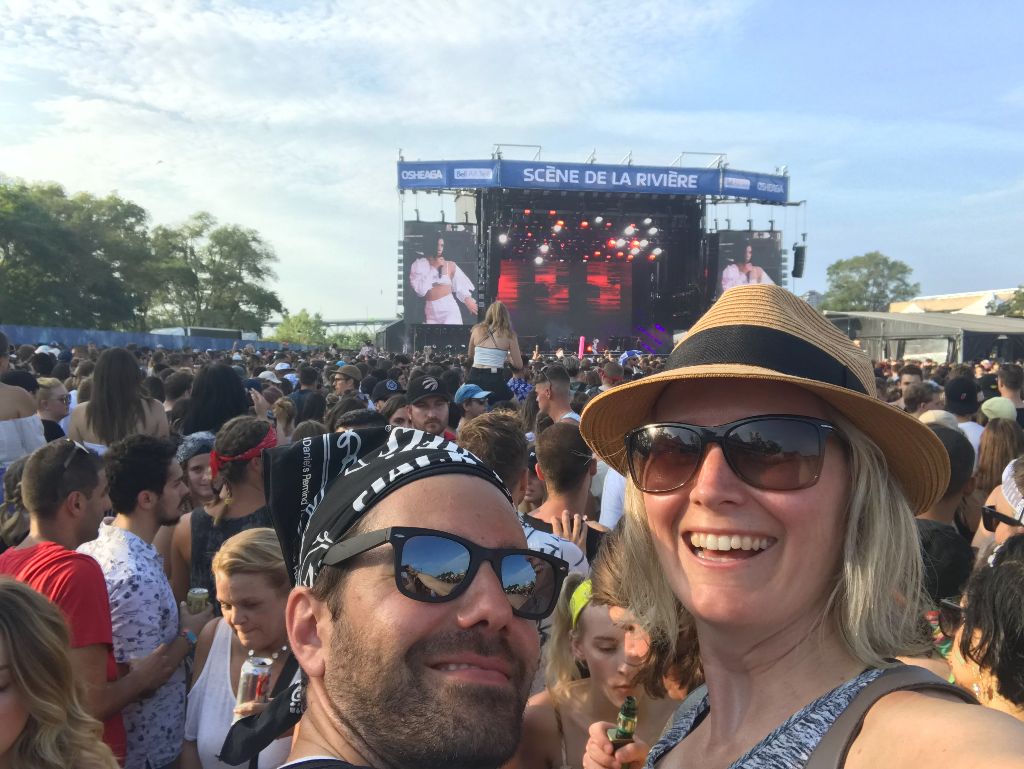 Montreal has been on our travel Canada hit list for some time now, so when my friend Adrienne asked if we wanted to join her for the August long weekend, we took her up on the offer of a free bed.

We took a couple extra days off work so we had extra time to eat and have some extra fun in the sun (and humidity). Here are 10 things that will can keep you busy on a summer weekend in Montreal.

1. Watch tennis at the Rogers Cup

Both The Spaniard and Adrienne are tennis fans, so when the initial invite came to come visit – we knew we would be going to the Rogers Cup. This year the women were playing in Montreal, and we got up-close with number of high-ranked players including Johanna Konta, Jelana Ostapenko, Sloan Stevens, and Maria Sharapova.

A storm rolled through, which resulted in a rain delay. Thankfully our seats were covered.

Montreal is a food-lovers dream city. We arrived late on Friday afternoon and decided the best way to orient ourselves (it was The Spaniard’s first time in Montreal), was to walk sharing bites in a number of neighbourhoods. We walked through the Jean Talon market where we had a gluten-free crepe at Crêperie du Marché, watched the expert bagel flipping at St-Viateur Bagel,  ice cream at Kem Coba, and finally, we ordered take-away from Schwartz’s Deli (one of Canada’s oldest delis serving up legendary smoked meat sandwiches. There were plenty of available picnic style seats and benches across the street – which was good enough for three of us to down piping hot fries and mounds of Montreal smoked meat.

a gluten-free crepe at Crêperie du Marché made with egg, ham, potatoes, cheese and maple syrup.

3. Get your groove on at Osheaga Music & Art Festival

Once we had our flights booked I checked in with my beautiful friend Mathieu to see if he would be in Montreal for the August long weekend, and he asked if was going to Osheaga. I am so glad he asked the questions, as once we checked out the lineup – we quickly bought tickets for the close out Sunday show. I was blown away how well organized the music festival was. There were so many fun, free activities to keep people entertained between all the stage and the people-watching was absolutely incredible. If you are in town for Osheaga – buy tickets and check it out!

Thankfully there were fountains to keep us cool – the humidity and heat were fierce on the Sunday at Osheaga this year.

4. A wander through the Jardin Botanique – Montreal’s botanical garden

Easily accessible using our weekend Metro pass, The Spaniard and I saw just a fraction of the botanical garden. We saw a number of creepy-crawly bugs in the Insectarium and then walked through some of the Asian gardens. When we got home we saw photos of some of the exhibits and areas we missed – we only spent a few hours there so next time I would give myself more time to explore.

I’m not sure how they are doing it, but I found two bakeries within walking distance of our Air BNB that were selling incredible flaky, gluten-free pastries. Boulangerie Le Marquis served up an almond croissant so tasty The Spaniard thought it was better than the gluten-filled one he tried earlier in the day. And L’artisan délices sans gluten et sans lait, which was open both Sundays and Mondays, allowed me to stock up on bagel sandwiches, pizzas and pastries for both Osheaga and the Rogers Cup.

I made sure to research some gluten-filled bakeries as well, and The Spaniard indulged at Pâtisserie Rhubarbe,  Arte e Farina (for the pannettone), and Cheskies, described as an understated bakery featuring a variety of Jewish kosher pastries, cakes & other goods.

I’m sure for The Spaniard, Montreal did not feel euro, but all you need is a street made with cobblestones for  many of us Canadians to get a sense of European old-world charm. We were planning on touring the Notre-Dame Basilica, but as we walked up the steps we were told the Basilica was closed for a wedding, and no more tours/tourists were allowed in for the day. We had plans of going back another day but ran out of time. Instead, I would like to share this photo of a cement truck photo-bombing the Notre-Dame Basilica.

Loosely based on the history of Montréal, Cité Mémoire presents a cast of characters offering first-hand accounts of how the city has evolved over the course of history. With a touch of poetry and playfulness, over twenty scenes are brought to life through words, images, and music. You can download the free Montréal en Histoires application to enjoy the sights and sounds.

Montrealers must have a serious love affair with brunch – as the options felt endless, and not just on the weekends. We had four mornings and hit up brunch menus every day, and I had no problem finding gluten-free options. First it was on the covered patio at Bloomfield for french toast and socca, then we sat at the counter watching the kitchen at Maison Publique serve up meaty portions of bacon, blood sausage, and more sausage. For our third brunch we met up with Amelie (a friend of Miguel’s from his year in Sydney, Australia he hadn’t seen in eight years) and her boyfriend at Arts Cafe for duck poutine, and finally, we hit the weekday brunch (where I had the plate of smoked sturgeon salad of chayottes and omelette) at La Petite Addresse.

A friendship made in Sydney, Australia – a brunch reunion in Montreal eight years later!

8. Check out the street art

I must give a shout out to my friend Linda who was in Montreal the same weekend we were, and she was tearing up instagram with the number of instagramable walls in Montreal. The city feels like an outdoor art museum – I wanted to take photos of everything and with everything!

I was so impressed with the public transit in Montreal. Since we arrived on Friday afternoon, we took advantage of the weekend pass for $13.75, which gave us travel from Friday at 4 p.m. to Monday morning at 5 a.m. (including the airport bus).

Between the Osheaga festival fashion and the people headed to the Comic Con event that was on the weekend we were there, the people watching on the metro was absolutely amazing!

10. Take in the view of the city from the top of Mont Royal

I had originally thought we would hike up Mont Royal for a view of the city, but the humidity had us moving in slow motion. Instead, we opted to take advantage of our transit pass and take the bus, which conveniently dropped us off within walking distance of the Smith House, which had loads of information to explain why the small mountain at the heart of Montréal occupies such a big place in the city’s history, heritage and identity.

A view of Montreal (including the Olympic Stadium) from Mont Royal

Although we had four nights, our trip barely scratched the surface of places to eat or what to do in Montreal. There are so many of Canada’s top rated restaurants in Montreal, like Toque and Joe Beef, that we didn’t get to try. And it would be great to come back to experience their comedy festivals, a night of jazz, or even a sporting event. Our weekend in Montreal was just a taste – I can’t wait for our next visit!

* Thankfully I won’t have to wait too long for a little bite, since Adrienne is bringing back two cans of maple syrup for me. Thank you buddy for the incredible hospitality.