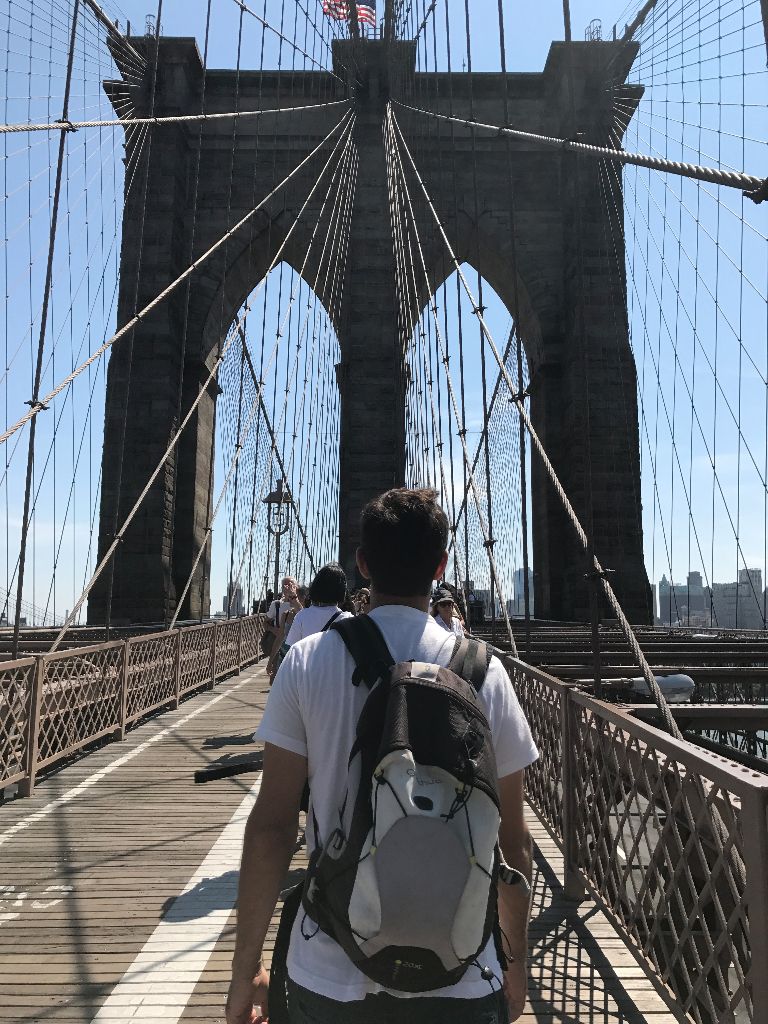 Over the Labour Day Weekend, The Spaniard and I jetted off (that sounds far more glamorous than the red-eye flight we took from Edmonton to Montreal, and then on to La Guardia), for a weekend in New York City. Both of us had been there once, but for each, it felt like a lifetime ago. While I am normally the one in charge of planning vacations and trip, this was entirely The Spaniard’s choice. You see, he wanted to go to the US Open. Since I force him to watch ice hockey – it is only fair I agree to watch some of his favourite sports as well (like our trip to San Antonio to watch an NBA game).

Arriving at La Guardia Friday morning and checking into our AirB&B in Astoria Queens by 11:30 a.m. meant we had almost four full days. Although we were jet lagged from an overnight flight – here are 10 things that kept us busy in the five boroughs:

1. 12 hours of tennis at US Open
Months after we bought our tickets, we managed to secure seats in the Arthur Ashe Stadium for the round of 16 the day the US Open singles tickets went on sale to the public. If we had bought for the day before we would have been able to see Nadal and Federer, but instead, we got a great line up of women’s games (we watched Venus Williams win and Maria Sharapova lose). A highlight for me was getting to watch Denis Shapovalov, the 18-year old Canadian kid who recently beat Nadal, in the opening game that day. Sadly he lost in straight tiebreaker sets to The Spaniard’s countryman Carreño Busta, but it was still a great match, and a great day of action-packed tennis.

2. Ate ice cream on the High Line
Thanks to my friend Ashely’s recommendation, we walked the High Line –  a 1.45-mile-long elevated linear park, greenway and rail trail that affords some great views from Hudson Yard to northern Chelsea. We popped into the Chelsea Market where the former National Biscuit Company warehouse in the meatpacking has been transformed into an urban food hall. My friend Marc suggested trying L’Arte Del Gelato, which I happily enjoyed as we walked along the urban oasis.

3. Two musicals and a free show on Broadway
We didn’t do much research about what to see when we were in NYC, and as we were trying to decide if we should buy discount tickets from the TKTS booth in Times Square, or rush seats directly from the box office, we stumbled upon a unique show in Times Square. As I pushed around a crowd of people I came face to face with a naked man (ok so I had to look down to see he was naked). I scanned the crowd and found The Spaniard near the back smiling at me – he saw naked dude before I did and changed his path. We seemed to arrive just as the cops did. Someone near us asked one of them if it was legal – and they said they weren’t sure. A woman who was recording the show (basically he was just standing on a mat saying ‘hey’ into a microphone) provided two of the cops a sheet of paper. After looking it over – they seemed to be content with whatever permit they had, and the free nudity continued.

As for paid shows – we got rush seating ($39 each) to School of Rock as well as rush seats four minutes before the curtain call to Miss Saigon ($49 each).

4. A Yankees Game
We rode the subway out to the Bronx to catch one of the biggest rivalries in American baseball – the New York Yankees vs. the Boston Red Sox.

Sadly, the home team lost that night, but I think I was the real winner – because the new Yankees stadium has a dedicated gluten free cart! My sausage dog was $8.75 and worth every penny.

6. Made Friends on the Subway
When we arrived to NYC, we opted for the $33 seven day transit pass, which meant loads of subway travel. On our way home from the US Open we were on the platform waiting for our transfer subway when a voice called out for help navigating down past an individual sitting on the steps. I was so fascinated by the New Zealand gentlemen who eagerly explained that he found the chair for free, but since it wouldn’t fit in the Uber, so he had to take it on the subway. I desparately wished that he was on our train – as I would have loved to get a shot of him sitting in it while riding the rails, but sadly we had to say goodbye. I do hope he and the chair made it home in one piece.

7. Sought out Gluten Free eats
Thanks to some tips from Tara –  a fellow gluten-free girl I met in Turkey and have remained facebook friends with – I had some suggestions to check out in NYC. First up with Erin McKenna’s Bakery, the muffin top sandwich was nothing to get excited about, but I did enjoy the Samoa doughnut. (The place is GF and vegan and maybe it is just me – but I think everything tastes better with butter).

Next, I indulged in a rare treat – fried food! At Lili’s 57 I tried the salt and pepper squid as well as the Singapore noodles.

While at the US Open, we left the grounds to get our Mexican fix with a quick walk to Tortillería Nixtamal for some great-tasting gluten free tamales, tacos and flan.

I struck out at two brunch places in Astoria, but finally found something worth coming back for at Friedmans. The location we went to was packed, and since they cater to gluten free diners I had loads of options to choose from.

Finally, we sat down for some arepas at the Caracas Arepas Bar in Williamsburg, Brooklyn. Food was great and the patio out back was the perfect pit stop for a late afternoon lunch.

8. Checked out some Spanish Architecture
After walking past the crowd of people getting photos with the Chasing Bull and the Fearless Girl and taking a moment at the 9/11 memorial reflecting pools, we found ourselves heading towards the Oculus, a Santiago Calatrava designed structure that houses the World Trade Centre Transportation Hub. I felt it looked more like a skeleton rather than the image of a child releasing a dove – which inspired Calatrava. Dubbed as the world’s most expensive transportation hub, it is another example of Calatrava’s over budget and delayed projects. The design was impressive, and unlike the last Calatrava building I was in (which was the Palace of Exhibitions and Congresses City of Oviedo), I didn’t spot any buckets collecting water from leaks in the roof.

9. Walked amongst the hipsters in Williamsburg
Our AirB&B hosts told us that Williamsburg has become so hip, that rent prices can be higher than Manhattan. We walked around the neighbourhood, admiring the cool kids enjoying brunch, the funky vinyl shop and live music venue at the Rough Trade, and people enjoying life in the East River State Park. While we heard everything is expensive, we did manage to find a retro bakery with vintage prices. At the Peter Pan Donuts and Pastry Shop, The  Spaniard took advantage of the $1.10 donuts and indulged in a double dose of gluten.

10. Admired the Flat Iron Building
It is hard not to look around at the arcitecture of NYC and be impressed, but we found a few spare minutes before we had to head to School of Rock to sit and admire the Flatiron Building. Built in 1902, it was 20-story building with a unique triangular base was the world’s tallest building until 1909. Right after I took this lovely photo of The Spaniard:

I noticed I was standing next to the Lego Building, which also provided a quick, cheap, and easy way to visit the Statue of Liberty.

One thing we did not get to do was check out the New York Public library. We arrived to find a sign that said closed for the long weekend. Disappointing, especially since I wanted to check out where Carrie and Big were supposed to get married in Sex and the City.

Looking back, it felt like we were go, go, go the whole time, and yet we didn’t manage to scratch the surface that is NYC. I think you could spend years there and still find new places to explore, shows to see, and places to eat. We didn’t even make it to Central Park! I guess we’ll just have to save it for our next trip to la gran manzana.