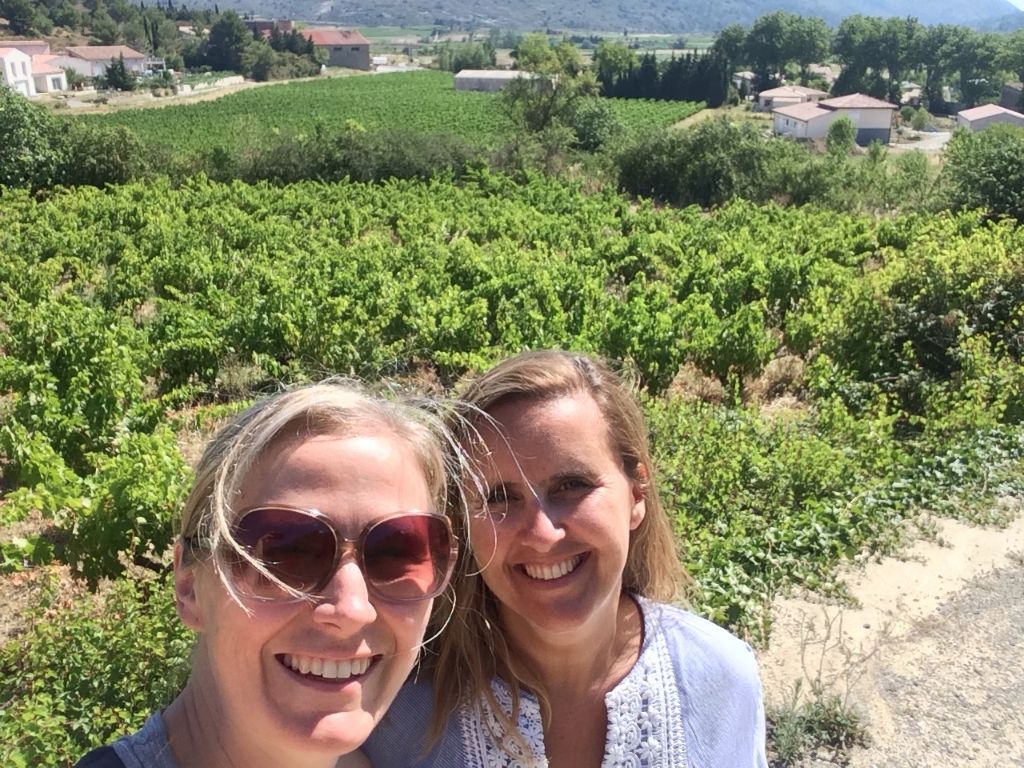 It was December 2006 on a minibus in Bali when I first met Tine & Joe from Belgium. We spent the whole day traveling to Gili Trawangan, (bus, boat, bus, boat) where we spent the next week together and even celebrated Christmas along with a rag-tag group of travellers. Five years later I visited them in their home of Antwerp, meeting their then two-year-old son Jack. When I let Tine know I was coming to Europe this summer she said I could come visit them at their place in the south of France.

Since I have never been to the south of France before – how could I say no?

I took a train from Barcelona to Carcassonne in the region of Languedoc-Roussillion. Tine met me at the station, pointing out the medieval fortress the town is famous for, but stressing she would not be taking me to the touristy site (they have been too many times).

We travelled 25 km to the quant town of Montlaur where I spent the next three days chilling at their beautiful home.

On my first morning Tine took me on a tour of town (took less than ten minutes) and up a hill for a view of the countryside.

The day was filled with pool time, lunch, a nap, and then a stop at the afternoon market in town.

The last time I saw Jack he was just a blonde-haired two year old chatting away in Flemish. Fast forward five years later and he still has the mop of blonde hair, speaks in a language I can’t understand, but is wise beyond his years. The seven-year-old has take up an interest in petanque – a French game that reminded me of the bocce ball.

Joe has been taking Jack to participate in weekend tournaments and league nights – playing against old men with a lifetime of experience. I learned that Jack is quite mesmerized by the local petanque champ Gil – thanks to a meeting coordinated by their gardener, Gil stopped by to play with Jack and give him some pointers on the day I was there.

After the master left I decided to give it a go – keeping the first game tight, but only with the help of impartial judge who busted out the measuring tape many times. I was onto this seven-year-old and his quick ‘grab the ball and claim a point’ ways. I took the second game – which was not appreciated by seven-year-old hussler.

I can recall Joe making me the best steak when I stayed in their home in Antwerp years back – his skills on the BBQ with chicken in the south of France did not disappoint.

The next day we drove east towards Narbonne where we went on a tour of the Gruissan salt pans where we learned you need three things to make salt – sea water, wind and sun.

The pink colour is the result of an algae fighting the salt concentration in the water.

We had a chance to taste the salty water and even take a sample of the salt home.

The salt pan even made the perfect location for a little catwalk strut.

After the tour we went for lunch for a taste of the oysters that they also farm at the site.

After lunch we stopped in at the beach in Narbonne but the winds were high and the lifeguard kicked us off for having a dog, so we went back home for some more pool time. Honestly, I could have spent another week just hanging out at the house in Montlaur.

My last evening there Joe and Jack went off to play jeux Lyonnaise with the locals – a game similar to Petanque but it involved team play and more aggressive throws. Since they teams are determined each night by pulling names from a hat, we had the pleasure of watching jack on one side of the court on a team with a grumpy old Frenchman and Joe in another game. Shouts of ‘good job Belgium’ had me laughing so hard.

I only had three nights to hang with my Belgium friends but I am so glad I made the journey to Montlaur. Since the series is tied 1-1 with Jack, I am looking forward to my next visit where I continue the Canada-Belgium petanque championship series.