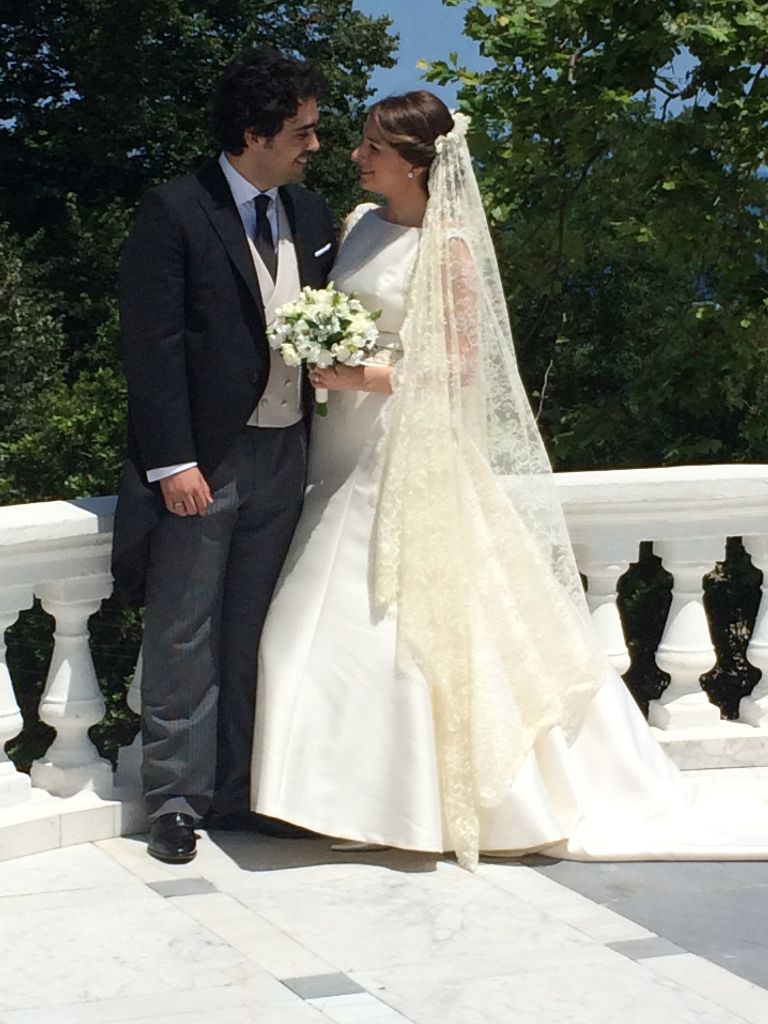 My first trip to Spain was booked in time to take in the nuptials of The Spaniard’s two friends from university – Soledad and Javier.

I had the pleasure of meeting the happy couple for drinks a few days in advance of the wedding. The bride sounded busy with details leading up to the event. The Spaniard tried to joke that he was planning on wearing shorts to the wedding, which got a smile from the groom, but a desperate ‘Please, just wear a suit,” response from Sole.

The Spaniard delivered – even putting in hair product for Sole’s and Javi’s big day. I think he cleans up rather nice.

On the day of the big event we walked down to the Catedral de Nuestra Señora de la Asunción de Santander, a beautiful cathedral in the centre of the city. Immediately The Spaniard was greeted by friends and classmates from his university days; I was lost in a sea of introductory kisses, names, and quick-talking Castilian Spanish.

Outside the church the women were dressed in an array of bright colours, hats, and fascinators.

I was concerned about what to wear to the wedding – sure I know what to wear in Canada – but in Spain I was nervous. I asked around in advance and learned that black was not a colour traditionally worn to Spanish weddings. With the help of Miguel’s friend Bea I decided on a royal blue jumpsuit; apart from my foreign blonde hair I felt like I fit right in.

We finally made our way inside to be seated; the interior of the cathedral with its tall columns and stain-glassed windows was gorgeous. While it had to be close to 30 degrees outside, it was surprisingly cool inside.

Javier, dressed in tuxedo tails, looked stoic walking down the aisle with this mother, and Sole had more than a few people choked up when she paused in the aisle just a few steps before meeting her groom.

‘Somebody’ next to me was also caught up in the moment.

Although my Spanish language skills are lacking, I was able to follow along through most of the ceremony.

Sole looked like a classic beauty on her wedding day. Her dress looked prefect in the historic cathedral and her veil was absolutely stunning!

After the ceremony we had some time to explore the cathedral.

I survived standing in these shoes for over 3 hours, and then I was done. My feet were ruined for the rest of the evening.

The college crew got together for some photos.

When I met The Spaniard’s friend Javier I was instantly jealous. Both of them have the most incredibly long thick eyelashes that girls back home would pay a lot of money for. I hate them a tiny bit – it really isn’t fair.

After taking a few group photos we were ushered to the front of the church where guests were holding fresh rose petals to throw when the newly married couple walked out.

The crowd cheered Vivan Los Novios! (An expression meaning long live the newlyweds, which was shouted throughout the day)

Outside the church there were buses waiting to escort us to the wedding reception at the Hotel Real, a white-washed five star hotel in Santander with a first-class view of the city and the coast.

We arrived at 2 pm to find an assortment of cold appetizers including cheese, jamon, and tuna tar tar.

Out on the patio we found a gentleman mixing up gin fizz martinis.

They were delicious – I may have lined up a time or two.

And it didn’t take long til we found the jamon!

Amazing how much joy a plate of meat can bring to so many.

As we all sipped and savoured on the patio, Sole and Javier could be seen taking photos.

We had a couple hours to indulge on the patio. I wasn’t the only celiac at the party – and while I couldn’t partake in the onslaught of hot appetizers that were being handed out – I was brought my own personal tray of gluten free goodies! The anchovy – caviar – cream combination was my favourite.

Even though I was full from the jamon and appetizer tray, we left the sunny patio for the ballroom so we could sit down for a 4 pm lunch.

I learned the groom is a Beatles fan, and we were sitting at the ‘Imagine’ table.

We welcomed the newlyweds to the ballroom.

And settling in for a four-course meal.

First up, each of us were served our own plate of lobster salad with pink grapefruit, almond milk and orange oil.

For the fish course we had monkfish medallions.

Clearly the guests at the Imagine table were enjoying the lunch.

We cleansed our palates with lemon and cava sorbet.

The meat course was solomillo – a sirloin steak served a mushroom tosta and gnocchi. It also came with two gluten free sauces – cheese and mushroom.

I received a special gluten free dessert (it made a few people at the table a little jealous).

But the real dessert lookThe Spaniard said the combination of ice cream came, macaron, and cream stacked biscuit was awesome.

After the meal a girl walking around with a bag approached our table and said my name. I was handed a small gift with my name on it – when I opened it I found a lovely hand-painted silk square scarf. The Spaniard said it is common to give a gift at the wedding – I was in shock to receive such a personalized present as a momento from my first Spanish wedding.

Before I knew what was happening the bride and groom were in an adjoining room having their first dance. I caught a glimpse but wasn’t in a position for a photo even though The Spaniard was front-row.

We watched a few more dances and then went back out for another drink on the patio.

There was time for a few photos with the happy couple.

And then we were ushered downstairs where the DJ had moved to ‘the party room’, complete with a buffet of candy. We all had a chance to dress up for the a photo booth – the pictures were used to fill a book that each guest could sign with a special note for Sole and Javi.

Some props were just too cool not to hang on to for a bit.

And since it had been about 90 minutes since we had last eaten – more food arrived.

There were cheese, tortilla, and sushi trays – but I was handed another personalized gluten-free tray. Thankfully I found some wedding guests to help me finish off the plate. Shocking – since the bride’s uncle had ordered pizza and people were digging into that too!

Upstairs another wedding was filling up the ballroom for a dinner wedding – but downstairs the party went from around 7 pm to almost 1 am. The bartenders were busy all night.

As we watched Sole and Javi’s last dance of the evening the lights on I thought the festivities were over. I was exhausted – clearly the bride and groom had to be as well.

But no – we jumped into cabs and went to a club in Santander.

A few minutes after we arrived – there was Sole – rocking out in her wedding dress.

I tapped out at 3 a.m. As I was leaving I could see that the bride and groom were still dancing. Sadly this Canadian girl cannot party Spanish-style; perhaps I’ll do better next time.

I was honoured to have been a guest at Soledad & Javier’s wedding on July 4th, 2015 in Santander Spain. The dress, the cathedral, the Hotel Real, the food, the dancing was all amazing. I’ll never forget my first Spanish wedding; vivan los novios!